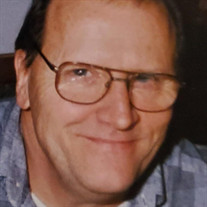 William “Bill” J. Orde, age 79 of Green Bay, passed away on Friday, February 26, 2021 at St. Vincent Hospital in Green Bay. He was born on February 5, 1942 in Green Bay to the late Walter and Lucille (Van Eyck) Orde. Bill was united in marriage to Sharon O’Leary on September 9, 1967 at St. Peter and Paul Catholic Church.   Bill attended and graduated from Green Bay East High School.  He then proudly served his country in the U.S. Army in the Vietnam War. Upon his return home, he married the love of his life Sharon.  Bill worked as an electrician for over 35 years at the now Georgia Pacific, which previously had been the James River Corporation.   Bill and Sharon enjoyed attending many Green Bay Packer games, as they were proud season ticket holders.  Bill enjoyed playing cards, fishing up North, family road trips, and vacations, years of adventure rides at theme parks with his grandchildren, many late nights at different casinos, dining out weekly at his favorite local restaurants., and attending various concerts, including Willie Nelson, Elton John, and Josh Groban, just to name a few. Above all he loved spending time with his family, and friends, making memories that would last a lifetime. He was a strong supporter, and donated to American Diabetes, Cancer and Heart Association along with Feed the Children. Bill had a huge sense of humor that entertained us all, and a very caring heart which welcomed so many others into his home. Left to cherish Bill’s memory are his children, Vicki Orde and Jennifer (Joseph) Price; grandchildren, Savannah Orde and Matthew and Nathan Price; great grandchildren, Korbin and Karter Rupiper and Hunter and Dawson Stangel; sister Joyce Wecker; brother, David (Catherine) Orde; brother in law, Lloyd (JoAnn Terrien) Steinbrecher; several in laws, nieces and nephews. He was preceded in death by his parents; wife, Sharon Orde; sister, Janice Steinbrecher; an infant brother, Joseph; brother in law, Armand Wecker and nephew, Brian Orde.   A funeral mass will be held for Bill at 11:00 AM on Friday, March 5, 2021 at St. Peter and Paul Catholic Church. Fr. Jose Lopez will officiate. Visitation will be held at church from 10:00 AM until the time of the service. Bill will be laid to rest in the Woodlawn Cemetery where full military honors will be performed.   The family would like to extend a sincere thank you to the staff of BayCare Eye Clinic and St. Vincent Hospital 8th Floor for all the care and attention they gave to Bill during his journey.

The family of William "Bill" J Orde created this Life Tributes page to make it easy to share your memories.

Send flowers to the Orde family.