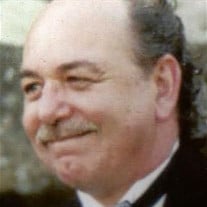 William “Bill” H. DeBeck, Jr, 75, of Tawas City, Michigan passed away peacefully on June 7, 2019 surrounded by family and friends. He was born to William Sr, and Doris DeBeck on April 22, 1944 in Green Bay, WI. Bill served his country in the Army, as a teletype technician in Germany from 1965-67. He worked in many places over the years, but his shining glory was the Red Barn/Red Barron restaurant as owner/operator in Madison WI, Manager/ Bartender at the World Famous Buckeye Inn in Madison WI and Bill would later retire from Lawton Foundry in Green Bay WI. If you were blessed enough to know Bill, you would know that he had an amazing sense of humor, and was always the jokester, unless you happened to be on the other end of a card game, dice game, pool stick or dart board where Bill was involved. In that case, our bet is that you walked away a little lighter in the pocket book! He had a competitive streak a mile long, but loved to have fun. He was always the favorite. The favorite bartender, the favorite Uncle, the favorite friend, and an amazing mentor to so many in the Madison area. In his later years, he took life pretty easy by enjoying some great fishing, wood working and just working in the yard with his nephew Jim. His absence will leave a giant hole in our hearts and lives. Bill is survived by his 3 daughters, Erin DeBeck, Kristin (Dareck) Cherwinski, and Angela (Eric) Kauffman; grandchildren, Zane (Kristina) DeBeck, Keegan Cherwinski, Noah, Jack and Molly Kauffman and one great-grandchild, Tessa DeBeck (who he called beautiful). Bill is further survived by his brothers and sisters, Lee DeBeck, Robert (Tina) DeBeck, Ron (Sue) DeBeck, Bonnie (Robert) Vanderleest, Jerry (Gloria) DeBeck and Kathy (Don) Dickert. He is also survived by many, many loving nieces and nephews who he loved and adored beyond measure. He is preceded in death by his parents and his sister-in-law, Nancy DeBeck. Visitation at Malcore (West) Funeral Home, 1530 West Mason Street, Saturday, June 15, 2019, from 1pm until the time of the service. A Celebration of Life Service will be held at 3pm Saturday at the funeral home followed by full military honors. There will also be a Celebration of Life at the Fraternal Order of Eagles Hall on U.S. 23 in East Tawas, MI on Sunday, June 30th from 2pm-4pm.

The family of William "Bill" H. DeBeck, Jr. created this Life Tributes page to make it easy to share your memories.

Send flowers to the DeBeck, family.