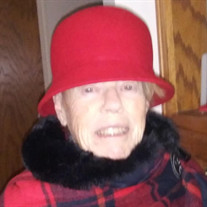 Virginia L. Walker, 83, Green Bay, passed away Saturday evening, January 18, 2020, at a local hospital. Born January 11, 1937, in Middle Inlet, she is the daughter of the late Harrison and Lucille (Edwards) Lytle. Virginia married Richard Walker on August 20, 1955 in Wausaukee and he preceded her in death in Sept. of 1998. After raising her family, she continued her education and became an LPN and later and RN. She was proud that she received her nursing degree at age 50 and worked as a nurse for 25 years, many of those years at Bellin Memorial hospital. Virginia was an active member of Christ Alone Church and a member of the Mary Martha Circle. She will be remembered for her enjoyment of traveling, dancing, Black Jack and motorcycling but most of all she was a wonderful wife, mother and grandmother. Virginia is survived by three children and their spouses, Sherry and John Cudnohufsky, De Pere, Joyce and Keith Lilyquist, Moose Lake, MN, and Jean and Marshall Rudebeck of Barnum MN; two grandchildren, Andrea and Scoot Stuber, Hawaii, and Nathan Bronk of Green Bay; and one sister, Loretta Shellman of Oconto Falls. She was preceded in death by her parents; husband, Richard; daughter, Joanne Walker; brothers and sisters; and one brother-in-law, Robert Shellman in 2015. Per Virginia’s wishes, there will be no formal services held. She will be laid to rest with her husband, Richard in a private burial service in the Middle Inlet Cemetery. Malcore (West) Funeral Home is serving the family.

The family of Virginia L. Walker created this Life Tributes page to make it easy to share your memories.

Send flowers to the Walker family.