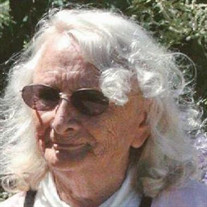 Ashwaubenon, Wisconsin – Violet R. “Stevie” Boyer, passed away suddenly on Monday, July 15th, 2019. Stevie was born to the late Charles and Minnie (Marshall) Stevens on September 29th, 1933 in the district of Stepney, Mile End Old Town, London, England. Stevie was raised by her Father’s Mum whom she called “her Gran” plus her Aunties Pinky & Queenie. When Stevie was six years old she was sent to live in the country during WWII and returned home when she was 12. Stevie worked as a clerk in London and enjoyed eating lunches on London Bridge. She enjoyed her work families at Montgomery Ward restaurant (18 years) and Target Ashwaubenon (18 years); plus was still currently employed!. The people she met and friendships she developed always meant so much to her. She also volunteered for the cub scouts for several years. There are so many stories of her life she shared about her time in England that are certainly going to be missed; as well as her thoughtfulness, encouraging words, kindness, and her special way of just making life a tad easier. She was a history buff, loved geography, sports (Brewers and Packers, until they let go of Brett), gardening, flowers, mocha decaf coffee, movies, documentaries, a good political debate, trivia, and many more hobbies. Stevie moved to the United States in 1956 with her daughter Karen. They had lived in Illinois for a short time, then moved to the Milwaukee area before finally settling in Ashwaubenon 48 years ago. Survived by her daughter Carol L. (Donald) Pamperin, Green Bay and her son David M. (Marianne) Boyer, Oconto. Plus many grandchildren, step grandchildren and great grandchildren and her nieces and nephews and their families in England as well as her best friend of 35 years Carol Just. In addition to her parents, Stevie is now reunited with her loving daughter Karen who passed away in 2010 whom she missed each and every day. She is also preceded in death by her sisters Hilda, Patricia, and Laura whom lived in England. Per Stevie’s wishes there are no formal funeral services. Malcore (West) Funeral Home is serving the family.

The family of Violet "Stevie" Boyer created this Life Tributes page to make it easy to share your memories.

Send flowers to the Boyer family.