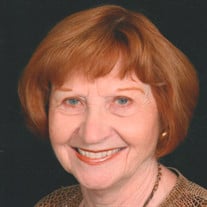 Martina “Tina” J. White, 83, Green Bay, died peacefully at her home on December 2, 2017. Born on January 30, 1934, in Dyckesville, WI, she is the daughter of the late Arthur and Esther (Paque) Malcore. Tina graduated from East Green Bay High School in 1952. After high school, she moved to Milwaukee for work and then attended Mount Mary College. On September 17, 1960 she married Walter “Wally” White at St. Philip’s Church. She moved back to Green Bay with Wally and three small children in 1967 where they settled in Allouez to raise their young family. Tina enjoyed collecting antiques and decorating and had a lifelong passion for art. She returned to school at UWGB where she graduated with a degree in Visual Arts & Communication in 1979. This was the start of her artistic endeavors leading to a successful career as an artist. She was a long time member of Green Bay Art Colony, taught workshops and displayed her work at art shows and galleries in Door County, WI and Scottsdale, AZ. Tina enjoyed traveling and spent many winters in Arizona. She made friends with people of all ages, always had a funny story to tell, and would liven up a room with her sense of humor. Tina is survived by her three sons, Jeffrey (Barb) White, Seattle, WA, David (Sandra) White, West Bend, WI, and Christopher White, Minneapolis, MN; and five grandchildren, Matthew, Kelley, Kyle, Jonathan, and Natalie. She was preceded in death by her husband, Walter; and her parents. Visitation at Resurrection Catholic Parish, 333 Hilltop Drive, Thursday, December 7, 2017, from 9:00 a.m. until the time of the funeral. Mass of Christian Burial 11:00 a.m. Thursday at Resurrection Church with the Most Rev. Bishop Robert Morneau officiating. Malcore (East) Funeral Home is assisting the family with funeral arrangements, 432-5579. Entombment at Allouez Chapel Mausoleum. The family would like to thank Unity Hospice and Green Bay Oncology. They would also like to extend a special thanks to Sherri Stock and the entire staff of Rebekah Haven Assisted Living for their compassionate and loving care.

The family of Tina White created this Life Tributes page to make it easy to share your memories.

Send flowers to the White family.