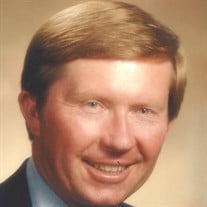 Thomas F. Wall Sr., 79, Denmark, died peacefully with his family by his side on Thursday, May 28th, 2020. He was born on December 17, 1940 the son of the late Francis and Sophie (Sepanick) Wall. Tom graduated from St. Norbert High School in 1959. In 1963, he earned a Bachelor’s degree in History from St. Norbert College. He served in the U.S. Army from 1963 to 1965 stationed in Germany. Tom discharged as a First Lieutenant, Military Intelligence. Tom began his career as District Manager for Red Owl in Milwaukee. In 1968 he earned his Master’s degree in Business from Michigan State University. In 1972 he joined Greiling Farms, a small family owned greenhouse in Denmark. Tom’s passion and hard work, alongside the Greiling family and their dedicated employees, grew Greiling farms into one of the largest wholesale greenhouses in the United States, selling bedding plants to retailers across the country. In 1974, Tom married Judy LeMieux. Judy, who he called “babes”, was the love of his life. Together they raised three children instilling their values, work ethic and generosity. Tom and Judy were very active in their community, teaching catechism to high school students at St. Mary’s, Tisch Mills and All Saints, Denmark for over 15 years. Tom served as president of the Denmark Community cupboard, All Saints Holy Name Society, All Saints School board and was a member of the American Legion. He served on the Denmark State Bank Board of Directors from 1988 to 2010 when he became Chairman of the Board until 2012. Tom is survived by his wife of over 45 years, Judy; three children: Francis (Clarissa) Wall, Denmark; Thomas F. Wall Jr, Denmark; Christina (Mike) Bienapfl, Bellevue; three grandchildren: Jack Wall, Sophie Bienapfl, Tommy Bienapfl; sister Mary (Bill) Watke; nephew David (Molly) Watke; niece Maggie (Chris) Bannowski, cousin Rose Pajerski and mother-in-law Kathleen LeMieux. Tom’s time, talent and treasure will forever be enjoyed for generations to come. He and his close friends planted thousands of trees that encompass the Carmelite Monastery, St. Norbert Abby, All Saints and St Mary’s parish. A celebration of the life of Tom Wall, a devoted husband, loving father and grandfather, and generous friend will be held in private. Malcore Funeral Home is assisting the family.

Thomas F. Wall Sr., 79, Denmark, died peacefully with his family by his side on Thursday, May 28th, 2020. He was born on December 17, 1940 the son of the late Francis and Sophie (Sepanick) Wall. Tom graduated from St. Norbert High School in... View Obituary & Service Information

The family of Thomas F. Wall Sr. created this Life Tributes page to make it easy to share your memories.

Send flowers to the Wall family.