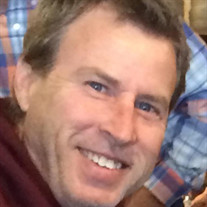 Thomas “Tom” J. Yuenger, age 53, left us to join his loved ones in heaven on February 10, 2022 after a hard fought seven-month battle with cancer. Tom was born in Green Bay, WI on July 26, 1968 to Susan (Kroll) Yuenger and David Yuenger Jr.  Tom worked as a machinist most of his life at various shops. His last place was ACMF. From the day that Tom was diagnosed with cancer he started on his “bucket list”. Which he finished the weekend before he died, with going ice fishing with his brother and friends in the ice shack he built on Kelly Lake. Tom loved all kinds of fishing, hunting and cooking. He really loved to build big campfires and hang around with his family and friends. We know when he gets to Heaven the first thing he will do is build a campfire and invite everyone there for a beer or drink. Tom is survived by his mother, Susan (Kroll) Yuenger; brother, Mike; son, Adam and his mother, Jodi Weaver; and daughter, Mylee and her mother Cindy Earley. Tom is further survived by many aunts and uncles on both the Kroll and Yuenger side. He also has many, many cousins. Tom was preceded in death by his father David A. Yuenger Jr.; grandparents, Austin and Dolores Kroll and David Sr. and Carol Yuenger; cousins, Dale Kroll and Michael Knoespel. He was also preceded by uncles, Jim, John, and Mark Yuenger, and a special friend, Mike Applin A memorial service for Tom will be held at 6:00 p.m. on Thursday, February 17, 2022 at Malcore Funeral Homes-West with Brenda Knaus officiating. Visitation will be held at the funeral home from 3:00 p.m. until the time of the service.  In lieu of flowers memorials can be made to Tom’s family for any final expenses and medical bills acquired during his illness. The family would like to send a special thank you to his brother, Mike and aunt Anne Gajeski for all their help and support during his hard time. Also many thanks to the folks at Unity Hospice especially, Ashley, Dana and Ashley; the doctors and nurses at HSHS especially Holly and Beth at St. Clare’s Hospital.

The family of Thomas "Tom" J. Yuenger created this Life Tributes page to make it easy to share your memories.

Send flowers to the Yuenger family.