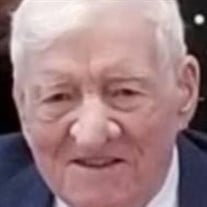 Thomas (Mac) McElroy, 92, passed away peacefully at home with his wife by his side on Jan 8th 2021. He was born to the late William and Catherine (O’Brien) McElroy on 5-25-1928 in Oak Park, IL. The years as a child and young man were happy days at home. Over the years, he fondly talked about memories of them. In grade school he was the lead choir boy because of his beautiful voice. He last sang as one of the Papa’s in Fidler on the Roof at St Norbert’s Summer Theatre. In High School, Mac made friends that lasted a lifetime. In retirement years, he would at times drive back to IL to meet with those friends for their monthly lunch together. In 1951 he was drafted into the army, from the reserves of the Electrical Corp of Engineers. Being a man who loved his country, he served very willingly in Korea for two years. He worked at keeping crucial communications going by stringing electrical lines at night, often being sniped at. After the war, Mac worked at Commonwealth Edison Gas and Electric Co in Illinois for 32 years. In 1957, a newly hired young girl walked into his department and into his heart. Mac and Sylvia (Rauzi) were married in 1959. Twenty years later they moved to Green Bay, where they founded Lizer Lawn Care. All of the children helped to work in the business to get it off the ground, with two of them temporarily leaving college to do so. He was happy and proud of the two young men, John and Brad, who later bought the company. They were later joined by Mike “The Kid” and Sam and together with a large crew they kept its reputation and quality work growing which made Mac very happy. Mac loved his children, their spouses, grandchildren and great grandchildren so much and always prayed for them! He loved family gatherings with all 48 together. The more active the little ones were the better he liked it, especially watching them sled down our back hill. He would still be laughing at their antics after they left. Whenever doing a repair or project he would never miss the opportunity of teaching his children how to do it. He also greatly enjoyed his fishing trips with his sons and son-in-laws. Mac enjoyed sharing the little things in life with his wife and children like sitting in the garage watching the rain. Mac was the keeper of many facts which he loved to share with his family and friends. They were always in awe of where he learned so much about so many things. Another constant in his life was that he believed tea cured everything from a bad headache to an injury. Mac really loved mystery stories, they were his favorite talking books. Also he loved animal shows, comedy shows, a good movie and the news on TV. In addition, he loved sitting on his swing, in the front yard, visiting with neighbors and waving to cars that drove by. Mac was involved in many organizations. He belonged to the Professional Lawn Care Association of America, Green Bay Small Business Chamber of Commerce, Brown County Home Builder’s Association, Esto Vir Catholic Men’s Group, Allouez Noon Optimist, the Shamrock Club and St. Matthew Parish Council. Anyone who ever known Mac, knows of his constant Irish humor and fast wit. He loved nothing as much as he did visiting, talking and laughing with anyone he was with. It was his absolute favorite thing to do! There was never a conversation without laughter. Mac was survived by his loving wife of 61 years and his six children Monica (Kurt) Denissen, Thomas (Mary Ellen) McElroy, Denise (David) Parker, Joseph McElroy (Tony Sestito), David (Jill) McElroy and Kathleen (Jon) Pazdera, 17 grandchildren and 19 great grandchildren as well as 2 nephews and their families. Mac was preceded in death by his parents, William and Catherine McElroy, his brother and sister-in-law, Bill and Marigrace McElroy, his sister and brother-in-law Catherine and John Noone and niece, Nancy Noone. Visitation from 9-11am with a Mass of Christian burial to follow at St Francis Xavier Cathedral on Saturday, January 30th. Private entombment at Allouez Chapel Mausoleum. Due to Covid there will no luncheon to follow. Masks and social distancing are requested by the family. A Celebration of Mac’s Life will be on May 29th. In lieu of flowers memorial donations will be presented to St. Mother Teresa’s Order of Missionaries Charity and Paul’s Pantry. Special thanks to Chuck, Greg and Jody who faithfully visited Mac every week for over a year. To Leah of Aurora Hospice and Heather of Helping Hands Home Care for bringing light and happiness into his life.

The family of Thomas (Mac) McElroy created this Life Tributes page to make it easy to share your memories.

Thomas (Mac) McElroy, 92, passed away peacefully at home with...

Send flowers to the McElroy family.