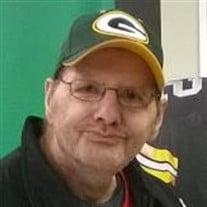 Thomas “Tom” C. Geronimi, 64, Green Bay, passed away unexpectedly, Monday, Nov. 18, 2019, at his home. Born on April 5, 1955 in California he is the son of the late Anatol Geronimi and Edna Martin. Tom was raised by his father and step-mother, Sharon (May) Geronimi. Tom served in the U.S. Army and attended engineer school while in the service. He suffered from some disabilities but was a strongly independent person. Tom was proud of the fact that on his own he was able quit smoking and drinking alcohol. He was an avid Packer and Badger fan who loved his cat, Smokey. Tom will be remembered for his great sense of humor. Tom is survived his two children, Christopher (Reanna) and their daughter, Harmony, and Amy Geronimi, all of Green Bay; brothers and sisters, Tina (Elizett Mendez) Geronimi, Devra (Doug) Siebert of Florida, Denise (Tom) Mooren, and Rudy May, all of Green Bay, Laura Taurianen of Michigan; numerous nieces and nephews; best friends, Brian, Mitch and Terry; and his many friends at Fort Howard Apartments He was preceded in death by parents and his mother who raised him; and the love of his Tammy. Visitation at Malcore (East) Funeral Home, 701 N. Baird Street, Monday, June 29, 2020, from 1:00 pm until the time of the service. Memorial service, 3:30 pm at the funeral home with military honors to follow. Tom’s family extends a special thank you to Independent Living Services (ILS).

The family of Thomas "Tom" Geronimi created this Life Tributes page to make it easy to share your memories.

Send flowers to the Geronimi family.