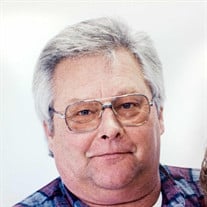 Thomas M. DeChamps, 73, Green Bay, died peacefully in the comfort of his home on September 3, 2021. Born on October 4, 1947, in Clintonville, he is the son of the late Marvin and Mildred (Greatens) DeChamps. He was a 1966 graduate of Preble High School. After graduating, he served in the U.S. Marine Corps Reserves for 6 years. On October 26, 1968, he married the former Linda Ann Burt at St. Joseph’s Church in Green Bay and she preceded him in death on July 27, 2013. Tom worked for various local companies, retiring in 2013 from Paper Transport after faithfully serving there for 23 years. He will be remembered for the joy he found in cutting his lawn and sitting on his deck visiting with friends and family with a PBR in his hand. Tom also cherished the times spent putzing in “the shop” with his beloved wife, Linda, whom he missed greatly after she left us. Tom was a hardworking, quiet man his entire life, who provided for his family, which was the most important part of his life. Tom is survived by his two children, Tom (Melissa Foley) DeChamps, and Lisa Arcand, all of Town of Scott; three grandchildren, Gary (Amanda) DeChamps, and Dean and Derek Arcand; one brother, Tim (Sherry) DeChamps; Mary Jo (Dan) Everard, and Sue Ann (Shawn) Demeny three brothers-in-law, Russ (Mary) Burt, Bill (Mary) Burt, Pat (Joan) Burt; two sisters-n-law, Nancy (Ted) Kuhn, Marie Piechowski; and many nieces and nephews. He was preceded in death by his parents; wife of 44 years, Linda; son-in-law, Dean Arcand; father and mother-in-law, Russell, Sr. and Marjorie “Marge” Burt; two brothers-in-law, Bob “Birdie” Burt and Dave Piechowski; and one sister-in-law, Jean Burt. Visitation at Malcore (East) Funeral Home, 701 N. Baird Street Thursday, September 9, 2021 from 5-8pm. Visitation to continue Friday, September 10, 2021, at Holy Cross Church, 3009 Bay Settlement Road, from 11am-12 noon. Funeral Mass 12 Noon at the church. Tom and Linda will be laid to rest together in Holy Cross Cemetery, Bay Settlement on their wedding anniversary: October 26th. In lieu of other expressions of sympathy, a memorial fund has been established at the funeral home.

Thomas M. DeChamps, 73, Green Bay, died peacefully in the comfort of his home on September 3, 2021. Born on October 4, 1947, in Clintonville, he is the son of the late Marvin and Mildred (Greatens) DeChamps. He was a 1966 graduate of Preble... View Obituary & Service Information

The family of Thomas M. DeChamps created this Life Tributes page to make it easy to share your memories.

Send flowers to the DeChamps family.