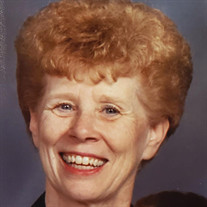 Shirley R. Knaus age 85, passed away on Tuesday, December 14, 2021 at St. Vincent Hospital with her family by her side. She was born on April 19, 1936 in Green Bay to the late Fred “Fritz” and Margaret (Ehrhardt) Process. She was united in marriage to Allen Knaus on June 13, 1964 in Green Bay. Shirley graduated from Green Bay East High School in the class of 1954 and also took some college business classes. Through the years Shirley was not only a housewife, but she worked miscellaneous jobs and volunteered time at the St. Vincent Neonatal unit, Nicolet School, Trinity Lutheran School and N.E.W. High School. She was in charge of little league uniforms for the Green Bay Optimist Club spending countless hours sewing and cleaning those uniforms. She loved taking care of not only her children, but also every child she came in contact with. Shirley was a voracious reader, sometimes reading three books at a time. She enjoyed shopping and going out to dinner. Was known for being a very good cook, always making chocolate chip cookies, peanut brittle and fruitcake for Christmas gifts. Through the years, Shirley and her family enjoyed many trips. Some of her favorites included Disney World and Mall of America. Left to cherish her memory are her husband of 57 years, Allen Knaus; daughter, Michele (Ken) Staszak; son, Nathan Knaus; sister, Sharon (John) Kielpikowski; nieces, Barbara (Chad) Vandenbusch, Wendy Kuske (Steve), Julie (Don) Hazaert, Pamela Rausch and Carie Kielpikowski; nephews, Alan Meverden and Patrick Meverden (Laura) and Chad (Jesse) Kielpikowski. She is further survived by numerous great nieces, nephews, other relatives and friends. She was preceded in death by her parents; son, Steven Knaus; sister, Janet Meverden; and nephew, Terry Meverden. A funeral service for Shirley will be held at 11:00 a.m. on Friday, December 17, 2021 at Our Savior Lutheran Church (120 S. Henry St.). Pastor David Hatch will officiate. Visitation will be held at church from 9:00 a.m. until the time of the service. Shirley will be laid to rest at Woodlawn Cemetery in Green Bay. In lieu of flowers a memorial fund will be established. The family would like to send a special thank you to the staff at St. Vincent Hospital, especially the ER nurses, the ICU nurses, Kam and Chelsea, and the 8th floor nurses, Evan and Nikki for all the dignity and respect they gave to not only Shirley, but the whole family during this difficult time. One of Shirley’s life mottos was, “I love my children, They are the greatest blessings in my life, no matter what mistakes I’ve made. I must have done something so right, God gave me them!!!”

The family of Shirley R Knaus created this Life Tributes page to make it easy to share your memories.

Send flowers to the Knaus family.