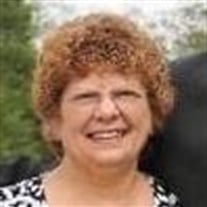 Sheila Nora Hammerberg, 79, of Kingsford was reunited with her mother and child into Eternal life on March 26, 2020 with her daughters by her side. She was born in Kingsford, MI on October 15th, 1940, daughter of Hazel Stachowicz and Antoine Pasquintonio. She was an only child who devoted many years to caring for her mother. Sheila worked many jobs, in her life, supporting her 5 children. She spent most years being a CNA/caregiver to many. She enjoyed her nights with friends playing cards and sharing gossip. Her children and grandchildren will remember her personality as one of a kind. She spoke her mind and told it how it was and ALWAYS had the last word in any argument. She was witty and strong willed, even up until the very end. Her baking will be greatly missed. Holidays and get togethers will not be the same without her homemade buns and dessert platters. Sheila is survived by her 4 children Clay (Donna) Ehmer of Norway, Marcy (Audy) Maye of Pembine, Stacy Stepien and Nick Ehmer of Pembine. She is further survived by her eight grandchildren Nicole (Shawn) Martin, Stephanie (Codey) Ehlert, Britney (Logan) Gruzynski, Mackenzie Stepien, Keifer Ehmer, Michelle Ehmer, Eric Ehmer, Amber (Kyle) Hopkins, and several great grandchildren including: Codie, Ema, Devin, Trent, Sofia, Olivia, Eliana, Avery, Nolan, Milana, Constance, Hunter, Hailey, Rayonna and Cheyanne. She is also survived by friends Ivan Hammerberg, Linda Grandquist, Bruce Burkman, cousin Joanne Lauresdaurf, wonderful neighbors and her beloved dog, Cash, who is missing her dearly. Sheila is proceeded in death by her mother Hazel Stachowicz, father Antoine Pasquintonio, step father Tony Stachowicz, step mother Millie Pasquintonio and her first born daughter Wendy Ehmer. Per Sheila’s wishes there will be no formal funeral held. At a later date there will be a celebration of life held with a cookout for family and friends to get together and celebrate her as she wished. “Yours until the moon kisses the sun goodbye”

Sheila Nora Hammerberg, 79, of Kingsford was reunited with her mother and child into Eternal life on March 26, 2020 with her daughters by her side. She was born in Kingsford, MI on October 15th, 1940, daughter of Hazel Stachowicz and Antoine... View Obituary & Service Information

The family of Sheila Nora Hammerberg created this Life Tributes page to make it easy to share your memories.

Sheila Nora Hammerberg, 79, of Kingsford was reunited with her...

Send flowers to the Hammerberg family.