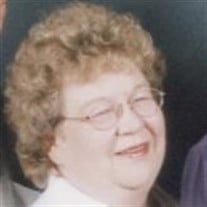 Sharon L. Orde, age 76 of Green Bay, passed away at home on Thursday, January 21, 2021, with her family by her side. She was born on August 4, 1944 in Green Bay to the late Edwin and Bernadine (Barrette) O’Leary. Sharon was united in marriage to William Orde on September 9, 1967 at St. Peter and Paul Catholic Church. Sharon attended Green Bay East through the 10th grade and went on to help out with the family after her mother died. Through the years, Sharon worked several jobs, but enjoyed cleaning people’s houses and caring for others. Sharon was a woman with a kind heart and tried to make everyone around her happy and safe no matter if they were a family member or a complete stranger. She was a strong supporter and donated to many different organizations such as Feed the children and several diabetes and cancer associations just to name a few. Her enjoyments included cooking for her family and friends, playing cards, going to the casino and shopping. Left to cherish Sharon’s memory is her husband, William Orde; daughters, Jennifer (Joseph) Price and Vicki Orde; grandchildren, Savannah Orde and Matthew and Nathan Price; great grandchildren, Korbin and Karter Rupiper and Hunter and Dawson Stangel; sisters, Carmon Richardson, Gail Quintanilla, Joann (Robert) Gerstner, JoAnn (Jim) Winnekens and Patti O’Leary; brothers, Michael (Lisa) and Robert (Lisa) O’Leary. She is further survived by a sister in law, Carole O’Leary; and numerous nieces, nephews and other relatives. She was preceded in death by her parents; in laws, Walter and Lucille Orde; step mother, Aloyus O’Leary; sisters, Bonnie Tassoul and Christine O’Leary; brother, Edwin G. O’Leary; brother in laws, John Richardson and Bernabe Quintanilla; and two nephews, Shane and Steve Tassoul. A funeral mass will be held for Sharon at 1:00 P.M. on Thursday, January 28, 2021, at St. Peter and Paul Catholic Church. Fr. Jose Lopez will officiate. Visitation will be held at church from 11:00 A.M. until the time of the service. Sharon will be laid to rest in the Woodlawn Cemetery. The family would like to send a special thank you to the staff of Unity Hospice and Lakeland Family Care for all the care and compassion they gave to Sharon.

Sharon L. Orde, age 76 of Green Bay, passed away at home on Thursday, January 21, 2021, with her family by her side. She was born on August 4, 1944 in Green Bay to the late Edwin and Bernadine (Barrette) O&#8217;Leary. Sharon was united in marriage... View Obituary & Service Information

The family of Sharon L Orde created this Life Tributes page to make it easy to share your memories.

Send flowers to the Orde family.