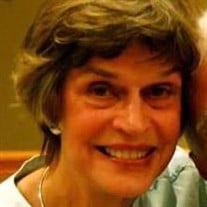 On Sunday, March 14, 2021, Sally Thomson, 80, loving wife, mother, grandmother, sister and aunt, died peacefully at home and surrounded by her family in Green Bay, Wisconsin. Born on October 14, 1940 in Saxton, Pennsylvania, Sally was the daughter of Edward and Mary Belle (Mears) Sanderson. When she was seven years old, the family moved to Barneveld, New York, where Sally grew up with a love of horses, nature, and adventure. Sally graduated from Holland Patent High School in 1958 and earned a Bachelor of Arts degree in English from Wilson College in Chambersburg, Pennsylvania in 1962. Sally taught middle and high school English in White Plains, New York; San Diego, California; New Orleans, Louisiana; Shreveport, Louisiana; and later in the Wallenpaupack Area School District in Hawley, Pennsylvania. In 1964, Sally married Harold Arthur “Tom” Thomson, Jr. in San Diego, California. Sally and Tom started married life by moving several times, as Tom served as a special agent with the Federal Bureau of Investigation, supporting civil rights laws in the southern United States. In 1966 Sally and Tom settled in Paupack, Pennsylvania, where Tom practiced law and later served as judge in Monroe and Pike Counties. Sally loved living in rural Pennsylvania with her growing family, cherished pets, and beautiful gardens. Sally lived her life with a focus on family, community, and learning. While raising her family in Paupack, Sally was active in supporting the Republican Party, the Paupack United Methodist Church, and many other community organizations. In 1990 Sally earned a Master of English Education degree from East Stroudsburg State University. From 1992-2000, Sally served as a Pike County Commissioner, the governing body of the county, and Chairman of the Board of Commissioners. Sally spent her retirement years with Tom focusing on family and travel. Throughout her life, Sally enjoyed traveling globally with her husband, daughters, and friends. Some of her favorite trips included visiting the Galapagos Islands with her daughter Ingrid, a hiking trip in the British Cornwall countryside with college friends, and many trips throughout Europe, Asia, and North and South America with her beloved husband, Tom. Sally had a special love of the American southwest, and she and Tom spent a winter volunteering with the National Park Service at Coronado National Memorial in Arizona. Horses were one of Sally’s favorite pastimes throughout her life, and as recently as 2012, Sally could be seen riding her horse Boston in the woods near Paupack. In 2012, the couple moved to Fredericksburg, Virginia to be closer to their daughters and grandchildren, where they built a house that overlooked a horse farm. In November 2020, they moved to Bellevue Retirement Community in Green Bay, Wisconsin close to their daughter Heather and her family. Sally is survived by Tom, her husband of 56 years, and daughters Ingrid Thomson of Washington, D.C., Tracey Flood (Edmund) of Havertown, Pennsylvania, Laura Walters (Travis) of Sarasota, Florida, Heather Piontek (Todd) of Green Bay, Wisconsin, Holly Clark (Barry) of Fredericksburg, Virginia, and Margaret Thomson (David) of Durham, North Carolina. She is survived by ten grandchildren, Maxwell Piontek, Sara Walters, Ethan Flood, Madeline Flood, Audrey Flood, Benjamin Piontek, Marin Walters, Liam Clark, Lucy Clark, and Charlotte Clark, a brother, Richard Sanderson of Falls Church, Virginia, a sister, Linda Krueger of Franklin, New Hampshire, and many beloved nieces and nephews, including Jim Bell of Pembroke, New Hampshire, Patrick Bell of Hopewell Junction, New York, and their families. In addition to her parents, she was predeceased by her sister Sue Ann Sperry. A memorial service for Sally will be held at the United Methodist Church in Paupack, Pennsylvania in summer 2021. In lieu of flowers, contributions can be made to the Paupack United Methodist Church at https://paupackumc.org or the Emily Couric Cancer Center at the University of Virginia at https://securelb.imodules.com/s/1535/16-uva/giving.aspx?sid=1535&gid=16&pgid=16919&cid=29111&sort=1&bledit=1&dids=670.665.666.365.287&appealcode=21CCQ14WEB.

The family of Sara Jane "Sally" Sanderson Thomson created this Life Tributes page to make it easy to share your memories.