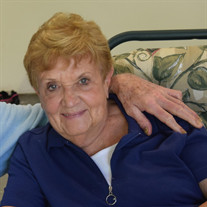 Ruth Jean (Kollman) Farah of Hobart passed away on Saturday, April 20th, 2019, which would have been her husband’s 94th birthday. She was born on October 5, 1929, the second youngest of ten children. She spent her childhood in Green Bay, growing up with many cousins, nieces, and nephews as her closest friends and family. Ruth strived from an early age to provide for herself and always wanted to ensure others around her had the best that they deserved. She graduated from Green Bay West High School and began working from a young age at the A&W as a car hop. It would be here, during a regular delivery of onions from the local grocery store produce man that she would meet her future husband Barney. Ruth and Barney married on February 10th, 1948 and together raised four children, Pat; Randy (Mary); Mark (Julie); and Rene’ (Bryan Pavlik). Together they would purchase the A&W franchise and expand to three locations in the Green Bay area. Ruth had many entrepreneurial hobbies including making and selling candles, ornaments and dolls. She would ‘send away’ for special jewels and crystals to ensure they were one of a kind. She volunteered her time at the Mary Guild and Hospice, and donated to many charities. She had a love of flowers and always had the most amazing arrangements around her home. Marrying into a Lebanese family she learned how to make many of the ethnic dishes, enhancing many with her own touch. Ruth enjoyed life’s adventures and wouldn’t pass up an opportunity to shop, travel the world or attend any of her grandchildren’s sporting events or recitals. Many vacationed with Ruth and Barney as they enjoyed spending 50 plus years wintering on Marco Island, Florida. Ruth’s compassion for all, her willingness to talk for hours, and acceptance for all walks of life are well known by anyone she interacted with. Her love for politics and the Packers brought out her high-spirited personality. She spent many hours reading and learning about history, health, exercise and new recipes which she loved to talk about while sharing a dessert after a meal. Ruth will be missed dearly by her three sons, one daughter, and their spouses; seven grandchildren; eight great grandchildren; many nieces, nephews, family and friends. Her gift for gab, thirst for knowledge, singing and loud cheers for the Packers will ever be engrained in our thoughts. Many thanks to Ruth’s niece Sandy Gore and the staff at Heartland Hospice, especially Sarah, for their special care given to our mother during this difficult time. Also, for her son Pat, for the many years of care given to our parents and for welcoming the many visitors during our mother’s short illness. Ruth was preceded in death by her husband Bryan “Barney”; her parents John and Anna Kollman; nine siblings, along with many cousins, nieces and nephews. She is survived by her sister-in-laws Carol Kollman and Joy Farah; brother-in-laws Carl (Pat) Farah and Phillip (Ruthie) Farah. Family and friends are invited to visit at Malcore (East) Funeral Home, 701 N. Baird St, Green Bay, on Saturday, April 27, 2019 from 1 p.m. to 4 p.m. A Prayer Service will follow at 4 p.m. In lieu of flowers a memorial fund has been established in Ruth’s name to support her favorite charities.

Ruth Jean (Kollman) Farah of Hobart passed away on Saturday, April 20th, 2019, which would have been her husband&#8217;s 94th birthday. She was born on October 5, 1929, the second youngest of ten children. She spent her childhood in Green... View Obituary & Service Information

The family of Ruth Jean Farah created this Life Tributes page to make it easy to share your memories.

Ruth Jean (Kollman) Farah of Hobart passed away on Saturday,...

Send flowers to the Farah family.