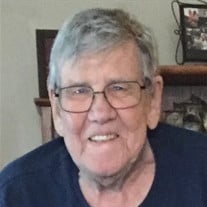 Roy J. Scofield, 84, Houston, TX (former longtime resident of Green Bay, WI) died on December 24, 2018. Roy was born in Green Bay, WI on October 29, 1934 to Myron and Florence Scofield. On August 28, 1954 he married Mary N. Wendricks, daughter of Edwin and Marian Wendricks, also of Green Bay WI. Roy enlisted in the US Air Force in 1952 at the age of 17 and served 20 years before retiring in Grand Forks, North Dakota. He went on to work with the Knights of Columbus as a field agent in Grand Forks and in 1979 he returned with Mary to their home in Green Bay where he continued working with the Knights of Columbus before enjoying their retirement years in North and South Carolina and their most recent home in Houston, TX. Roy was a loving husband and father, an avid Packer fan, enjoyed golf with friends, and loved time with his children, especially his grand and great grandchildren. He enjoyed camping on the beach at Salter Path Campgrounds, boating and jet skiing at Echo Valley Resort, dancing with Mary at the Arthur Murray Dance Studio and watching the dolphins from his condo in North Myrtle Beach. In retirement he often volunteered his time to his church and groups such as the American Legion and most recently the residents and workers at the Solana Preserve (their home in Houston) where he organized a fund drive for Solana workers and a Saturday Prayer and Communion group for the Solana residents. Roy is survived by his loving wife, Mary; sister-in law, Beth Wendricks (Barb Maszlewiski); four children and their spouses, Randy (June Anne) Scofield, Dawn (David) Grenier, Shelley (Acee) Lindem and Terry Scofield (Lisa McNally) and fifteen grandchildren, Justin Scofield, Sara Scofield (Josh Sanden), Jason (Christina) Kruse, Kristi Kruse, Joseph Grenier (Christine Lawson), Christopher (Merideth) Grenier, Stephen (Allison) Grenier, Brandon (Jenna) Grenier, Sophie Lindem, Marty Scofield, Julia Scofield, Alison McNally, Abby McNally, Emily McNally and Kyle Scofield; and he is also survived by numerous great and great-great grandchildren. Roy is preceded in death by his parents; his brother, Nathen Scofield; and two children, Mark and Martin Scofield. Visitation at St John the Baptist Church, 2597 Glendale Ave. Howard, WI, on Friday, January 11, 2019 from 9:30 AM until the time of the Mass of Christian Burial at 11:00 AM. Full Military Honors to follow the Mass, followed immediately by a luncheon. Malcore (West) Funeral Home is serving the family. In lieu of other expressions of sympathy, a memorial has been established in Roy’s name.

The family of Roy J. Scofield created this Life Tributes page to make it easy to share your memories.

Send flowers to the Scofield family.