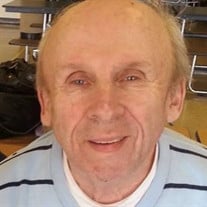 Roger “Blue Lightning” D. Princl, 75, Oconto Falls, found peace on Wed. October 23, 2019 while at a home with his wife at his side. Born Sept. 15, 1944, in Mishicot, he is the son of the late Arnold and Alice (Luckow) Princl. Roger proudly served in the US Army serving in Germany from 1963 and was honorably discharged in 1966. He was an active member of the American Legion. After returning from the service, he met and later married Eileen Resch, on April 17, 1971 at St. Joseph’s Church in Kellnersville. Roger was employed as a truck driver for many years, spending most of his life with the family business. Roger loved going over the road with his wife, Eileen, after the children were grown and left home. He was forced to retire from trucking due to health issues in 2007. Roger enjoyed his time hunting and fishing with his sons and grandchildren. Roger had many other interests, but his family and trucking was his true passion, especially keeping his rig in pristine condition (We won’t mention how he would sneak his children and grandchildren on trucking runs.) Roger is survived by his loving wife of 48 years, Eileen; children, Dawn (Anthony) Gervais and their children Tonya, Katherine, Hailey, and Aiden Gervais; Brenda (Jeff) Kruzan and their children, Bill, Mark, and Ciara Kruzan; Chad Princl; Craig (Kristel) Princl and their children, Nolan and Alexis Olson, Audrey and Izabella Princl; and Joe Princl; three great-grandchildren; siblings, Jerry (Mary) Princl, Nancy (Joe) Haen and James Princl; Eileen’s brothers and sisters; many other relatives and friends. He was preceded in death by his parents; Eileen’s parents, Dorothy and Louis Resch; two infant angel babies (a grandchild and great-grandchild). Visitation at Malcore (East) Funeral Home, 701 N. Baird Street, Sunday, Oct. 27, 2019, from 4-8pm. Legion Post 518 Memorial service at 7pm at the funeral home. Rosary recited by the family at 7:30pm Sunday. Requiem Mass, Monday, Oct. 28, 2019, 10am at St. Patrick’s Church, 211 N. Maple Ave. Entombment to follow in Knollwood Memorial Park, Manitowoc, with full military honors. Roger’s family expresses a special thank you to his dear brother-in-law, Richard Resch, also to JoAnn McConnell, and all the other wonderful caregivers.

The family of Roger D. Princl created this Life Tributes page to make it easy to share your memories.

Send flowers to the Princl family.