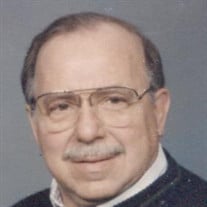 Roger Bredael was born July 17, 1939 to Roger Ray Bredael and Hazel (DeWitt) Bredael. He graduated from East High School with the class of '57 where he met Carol, the love of his life. They married and were blessed with three wonderful daughters and celebrated 55 years of marriage. After high school he spent three years in the Army Reserves. Roger's younger years were filled with family fun, especially the several camping trips per year up to Twin Bridge park; many times taking his best friend/cousin Ronnie with them. His love of Twin Bridge area stayed with him as soon as he was able, he and Carol bought a house trailer and boat so they could enjoy the area with their family. Their presence at Popp's trailer park continued on for over 50 years after they bought their own land in the park. Roger was a serious young boy and worked for Bellin Hospital and Careful Cleaners so he could buy his own car at 16. His pride in anything he owned showed up quickly as neighbors teased that he was going to wash the paint off his car. After graduation he joined Green Bay Packaging where he worked his way from laborer to supervisor to maintenance parts buyer. Roger enjoyed his family very much and often they enjoyed his many fish frys, booyah, and deliveries of pea soup. Through the years he did almost all grocery shopping and home cooking bringing his mom's many recipes into the next generation. He and Carol enjoyed many trips together, whether it was tent camping, RV camping, cruising, or staying at condos with their special friends. In the later years there were many casino bus trips. He also enjoyed his Wednesday Golfing Group and their 10th hole Side Kicks. Roger is survived by his two daughters, Julie (Joe) Webster of Shawano, and Theresa (Tom) Demeny of Luxemburg; son-in-law, Guy Harrison; 7 grandchildren, Sara (Bryan) Piper, Brian (Emily) Lardinois, Michelle (David Maldonado) Harrison, Dylan Harrison, Jayme (Kaitlyn) Demeny, Adam (Courtney) Demeny, and Haley Demeny; 4 step grandchildren, Nick (Jessica) Webster, Ryan (Sara) Webster, Ryan Harrison, and Michael Harrison; 9 great grandchildren; brother Gary (Diane) Bredael, and many other relatives and friends. Preceded in death by his wife, Carol; his parents, Ray and Hazel Bredael; daughter, Kathleen; father-in-law and mother-in-law, Arnold and Dorothy Pamperin; sister, Shirley Wyand; brothers-in-law, Jack Lannoye and Larry Brunette. Visitation at Malcore Funeral Home, 701 N. Baird St. Wednesday, March 4, from 9 AM until the time the Mass of Christian Burial at 11 AM at Saints Peter and Paul Catholic Church.

Roger Bredael was born July 17, 1939 to Roger Ray Bredael and Hazel (DeWitt) Bredael. He graduated from East High School with the class of '57 where he met Carol, the love of his life. They married and were blessed with three wonderful daughters... View Obituary & Service Information

The family of Roger Bredael created this Life Tributes page to make it easy to share your memories.

Send flowers to the Bredael family.