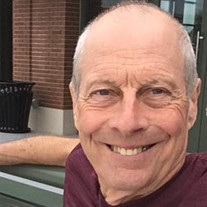 Robin J. Rasmussen, 65, Town of Scott, passed away peacefully while surrounded by his family Tuesday evening, August 15, 2017, at a local hospital. Born April 19, 1952, in the Town of Scott, he is the son of the late Maurice “Cowboy” and Beatrice “Bea” (Gibson) Rasmussen. Robin served in the US Army from 1971-74 and served in special ops in South Korea. When returning home he met his lifelong sweetheart, Mary A. Schleis, on Valentine’s Day 1975 and the two were united in marriage on April 10, 1976 at Saints Peter and Paul Church. Robin was employed with the US Postal Service for 35 years. He was a lifelong member of Wequiock Presbyterian Church and currently was serving as a Session member through 2019. Robin also enjoyed his canine companions. He will be remembered for his enjoyment of hunting with his brothers, gardening, cutting many a lawn, and had recently took up Pickleball at the East side YMCA. If Robin was not doing any of these, he could be found “wogging” with his daughter; completing several 5K races. Robin is survived by his wife of 41 years, Mary; two children, Michelle (Jeremy) Novoselatz and John (Maureen) Rasmussen; grandchildren, Scarlett, Yasmine, Derrick, Calla, and Collin; four brothers and sisters-in-law, Marlin (Patricia), Dick (Lorraine), John (Sue) and Dave (Debbie); sister-in-law, Mary Hoffman; aunt, Beverly Speerschneider; cousins, Pat and Keith; close friend, Dan Novoselatz; nieces, nephews, and other family members. He was preceded in death by his parents; two sisters, Jeanne Rasmussen and Sharon Engelfried; and two grandchildren. Visitation at Malcore (East) Funeral Home, 701 N. Baird Street, Monday, August 21, 2017, from 9am until 12 noon. There will then be a procession to Wequiock Presbyterian Church, 4014 Wequiock Road, where the funeral service to be held at 1pm. Burial in Pleasant Hill Cemetery. Robin’s family extends a special thank you to those who offered many prayers and words of encouragement.

The family of Robin J. Rasmussen created this Life Tributes page to make it easy to share your memories.

Send flowers to the Rasmussen family.