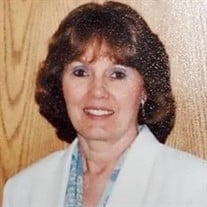 Roberta “Bobbie” M. Mehler, 78 of Green Bay, passed away on Monday, May 31, 2021 at New Perspectives Senior Living, Betty’s Harbor Memory Care Unit. She was born on May 26, 1943 in Phoenixville, PA to Joseph and Ermine (Locksmith) Jones. Roberta was united in marriage to Robert Mehler on June 19, 1965 in Menomonee, WI. Bobbie graduated from Messmer High School in Milwaukee in 1961 and in 1963 she graduated with a nursing degree from St. Mary’s Nursing School. Following nursing school, she worked as a registered nurse at St. Mary’s in Milwaukee until 1966. After her and Robert were married they moved to Norway, MI. She then worked as a secretary and bookkeeper for Bob’s Precision Engine Service, she and her husband’s business. They later (1985) briefly relocated to Independence, IA, they then moved to Green Bay in 1986. Bobbie went back to her love of nursing and worked at Bellin Hospital until her retirement in 2008. Bobbie loved to sing, garden and she loved Christmas. She sang at family gatherings, and in the church choir. In the 1980’s she and her friends Barb and Peggy started a singing group based on the Andrew Sisters. They sang together in costume at numerous local functions and events. Above all Bobbie loved her family. She was a dedicated wife and mother, but she really loved all people. Bobbie was extremely kind, always positive and was always giving to others. She loved to try new things and found an interest in just about everything she did. She was a faithful member of her local churches. She attended St. Barbara’s Catholic Church in Vulcan, MI, and then St. Lawrence Catholic Church of Navarino, WI. She was very involved in her children’s school, Holy Spirit Central School in Norway, MI. She assisted with fundraisers, committees and PTO. At St. Lawrence Catholic Church in Navorino she made wonderful friends and was involded in many church activities. Left to cherish Bobbie’s memory is her children, Diana Mehler and Matt Prestine of Green Bay, WI, Kat Mehler and Brad Larson of Minneapolis, MN, Mark Mehler of Casper, WY, Michael Mehler of Black Creek, WI and Dawn Bernhardt of Terrabonne, OR; grandchildren, Nikolas Schmit, and Oliver and Louis Bernhardt; step grandchildren, Emma and Trevor Prestine; and her siblings; Judy Jones and Rob Massie of Crivitz, WI, Jeff Jones of Langston, AL, and Kitty (Bob) Cook all of Howard, WI. She was preceded in death by her parents; husband, Robert; son, Steven; and brother, Chuck. A memorial service will be held for Bobbie on Friday, July 9,, 2021 at 4:00 p.m. at Malcore Funeral Homes- West. Visitation will be held at the funeral home from 1:00 p.m. until the time of the service. In lieu of flowers, the family asks that any memorials be sent to Unity Hospice. The family would like to send a sincere thank you to the staff of New Perspectives, Betty’s Harbor and Unity Hospice for all the love and care they gave to Bobbie during her final years.

The family of Roberta "Bobbie" M. Mehler created this Life Tributes page to make it easy to share your memories.

Send flowers to the Mehler family.