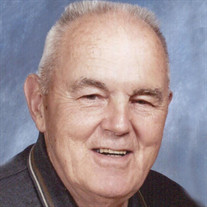 Robert Vanden Avond, 84, Green Bay, passed away March 10, 2022, surrounded by his family. Born on April 25, 1937, in Green Bay, he is the son of the late Ray and Mayme (Puyleart) Vanden Avond. Robert met the love of his life in 1960 and he married the former Betty Hoffman on October 27, 1962, at St. Boniface Catholic Church in De Pere. He started his own trucking company along with his brother Don- Vanden Avond Bros. Trucking. For 45 years driving dump truck was his passion. He was a long-time member of the Booyah Club at Saints Peter and Paul. Robert loved watching Nascar and most of all he enjoyed going to his grandchildren's events. He treasured the time on his John Deere lawnmower. Robert had a big sweet tooth and enjoyed his Sunday morning donut. He is survived by his wife of fifty nine years, Betty; four daughters, Karen Vanden Avond, Mary (Steve) Minor, Cheryl (Robert) Cerrato, Michelle (Mike) Wenzel; seven grandchildren, Natasha, Ali, and Max Minor, Robert (Bobby), Samantha (Sami) Cerrato, Marshal, and Mason Wenzel; brother and sisters-in-law, James Hoffman, Carol Brennan, and Ruth Feil; many nieces and nephews. Robert was preceded in death by his parents; brother, Don (Mary Lou) Vanden Avond; nephew, Jack; stepmother, Mary Jane; mother and father-in-law, Henry and Eleanor Hoffman; sister-in-law, Doris Hoffman; niece, Barbara Cerny. Visitation will be at Saints Peter and Paul Catholic Church, 710 N. Baird St., Friday, March 18, 2022 from 10 AM until the time of the Mass of Christian Burial at 12 PM (noon). Entombment at Shrine of the Good Shepherd Mausoleum will follow. In lieu of flowers, donations may be made to Unity Hospice. The family would like to extend a special thank you to the staff of Unity Hospice. Also, a special thank you to Home Instead, especially Carole.

The family of Robert Vanden Avond created this Life Tributes page to make it easy to share your memories.