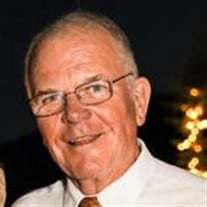 Robert M. Quigley, 76, Green Bay, passed away, September 18, 2018, at a local hospital. Born November 30, 1941, in Green Bay, he is the son of the late Robert and Marie (Goemans) Quigley. After Bob graduated from Marquette University, he took a position with American Can where he met his future wife, Sandra Stiehm. At that time, Bob was selected to attend The Naval Officer Candidate School in Newport, RI. He was commissioned an Ensign in Dec. of 1966 and in Feb. 1967, he married Sandra Stiehm. While serving in the US Navy he received his Masters Degree from Roosevelt University. Bob was an officer in the Supply Corps, and when scandal tarnished Navy purchasing in 1985, Bob was one of the square-shouldered career officers summoned to Washington to remove the tarnish and restore the honor. Bob served America for 26 years, retiring at the rank of Captain in 1992. Bob enjoyed participating in the Green Bay Baylander Barbershop Chorus for fifteen years and was active in the Military Officers Association of America (MOAA) since 1992. He will be remembered as a big-hearted individual who thrived on giving of his time, talent, and treasure to others and was a tireless promoter of all things Wisconsin. When Bob was a boy the Post Office often displayed posters with the caption: “Join the Navy and see the World”. Bob liked that idea and accepted the challenge. He and Sandra traveled the world making wonderful friends and moved thirteen times in twenty-six years. Bob is survived by his loving wife of 51 years, Sandra; adored father of Michael Quigley of Atlanta, GA and Jeffrey (Tina) Quigley of Oakton, VA; four grandchildren, Violet, Hazel, Cooper and Grace; a brother-in-law, Jeffrey Stiehm; other relatives and numerous friends. Memorial Mass, 11am Tuesday, October 2, at Holy Cross Catholic Church, 3009 Bay Settlement Rd., with Rev. David R. McElroy, O.Praem officiating. In lieu of other expressions of sympathy, memorials may be directed to Rawhide Boys Ranch or to the Building Fund at Holy Cross Church, Bay Settlement. Fair winds and following seas.

Robert M. Quigley, 76, Green Bay, passed away, September 18, 2018, at a local hospital. Born November 30, 1941, in Green Bay, he is the son of the late Robert and Marie (Goemans) Quigley. After Bob graduated from Marquette University, he took... View Obituary & Service Information

The family of Robert M. Quigley created this Life Tributes page to make it easy to share your memories.

Send flowers to the Quigley family.