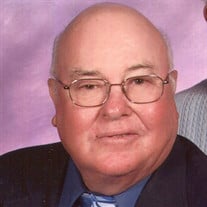 On April 25, our Risen Savior called Robert G. Mohr home to heaven. Bob was born August 13, 1934 in Prattville, Michigan to Creo & Velma Mohr. They were instrumental in laying a firm foundation in Jesus Christ in his heart. His faith and trust in Jesus were evident to others throughout his life here on earth. After graduating from Waldron High School in 1952, Bob was drafted into the army. He served over in Korea 1955-1956 Company B-6 Tank BN. The “Old Glory Honor Flight” flew Bob to Washington, DC in September 2016. Coming back to cheers from hundreds of people had him in tears. On September 29, 1957 Bob married Glenna (Tudy) Waterbury. They spent 33 years living in Morenci, Michigan where they raised their two children, Scott and Tina. After that, they spent their summers in Homer, MI at Lighthouse Village, and wintered in Mesa, Arizona. They moved to Green Bay, WI in 2014 to be closer to their daughter. He was preceded in death by his beloved wife, Tudy in March of 2015. Until that time, the 2 were inseparable. His sister, Elaine Eagle also preceded him along with their parents Creo and Velma Mohr. Bob’s surviving loved ones include his son, Scott and his wife Darla, their son, Micah and girl-friend Kayla along with Bob’s only great-grandchild, Jaxson Robert Mohr; Bob’s daughter Tina and her husband Pastor Steve Sauer and their children-Sarah, Alyssa, Brian, Laura (Joshua Schroeder), and Casey (Tyler Masters). He is also survived by his brother, Dean and his wife, Carol, and their sons Jeff (Susan) and Steve Mohr. Bob had been living at Oak Park Place for the past 15 months. The staff took wonderful care of Bob. together with Heartland Hospice, Bob, as well as his family, received excellent support. Thank-you Oak Park and Heartland Hospice. Services will be held on Monday, April 29th at Messiah Lutheran Church in Green Bay at 11am. Visitation is from 10 until the time of service. His son-in-law, Pastor Stephen Sauer will preside. Full military honors will follow. May our Lord grant us a joyful reunion on the Last Day. Malcore (East) Funeral Home is serving the family. Visit www.malcorefuneralhome.com to share a condolence.

On April 25, our Risen Savior called Robert G. Mohr home to heaven. Bob was born August 13, 1934 in Prattville, Michigan to Creo & Velma Mohr. They were instrumental in laying a firm foundation in Jesus Christ in his heart. His faith and trust... View Obituary & Service Information

The family of Robert G. Mohr created this Life Tributes page to make it easy to share your memories.

Send flowers to the Mohr family.