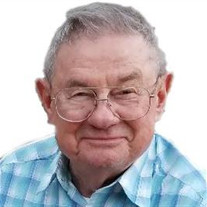 Robert W. Lanz, 82, Green Bay, passed away unexpectedly on Thursday, November 21, 2019. Born August 19, 1937, in Milwaukee, he is the son of the late Howard and Gladys (Malig) Lanz. On March 1, 1958, he married Janet Straub in Milwaukee. While Bob was pursuing his PhD in Engineering Mechanics at UW-Madison, the couple lived in Madison. After receiving his Doctorate, the family moved to Green Bay in 1969 where Bob accepted a position as a professor at the newly-built UW-Green Bay. In addition to teaching, he started his own consulting engineering firm. Bob retired from UW-Green Bay in the early 1990s. Janet preceded Bob in death on Sept. 20, 2000. Bob then met and formed a special relationship with Louise Prokash that lasted for the remainder of his life. Bob was an energetic individual who played in bands from college through retirement. Bob enjoyed free time and vacations with family at “The Shack” beginning in childhood. He eventually moved there in retirement. He enjoyed wintering in Florida and traveling out west, first with Janet and later with Louise. Bob will be remembered for his animated storytelling, his love of piloting his Cessna 150 and sailing his 19-foot sailboat. Bob is survived by his long-time companion, Louise Prokash; three children, Betty (Jacques) Aterianus of Suamico, Laura (Randal) Zakowski of Deerfield, and Karen (Paul) Schumacher of New Franken; grandchildren, Stephen and Holly Zakowski, Jessica Schumacher, Elizabeth (Drew) Kirsteatter, and Rose Schumacher; brothers-in-law, Richard (Ardyth) Straub, L. Thomas (Jean) Straub, and Gerald Troppman; other relatives and friends. He was preceded in death by his wife, Janet; one sister, Jane Troppman; and a sister-in-law, Patricia Straub. Visitation is at Malcore (East) Funeral Home, 701 N. Baird Street, Saturday, Nov. 30, 2019 from 1pm until the time of the memorial service at 3pm. Pastor Larry Lange is officiating. In lieu of other expressions of sympathy, donations may be directed to Research to Prevent Blindness (rpbusa.org) in memory of Bob.

The family of Robert "Bob" Lanz created this Life Tributes page to make it easy to share your memories.

Send flowers to the Lanz family.