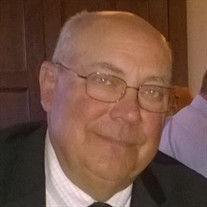 Robert L. “Bob” Wille, age 72, passed away peacefully at home on February 26, 2020 with his family by his side. Robert Lane Wille was born on March 22, 1947 to Richard and Margaret (Forney) Wille in Manistique, MI. He spent his formative years growing up in Elm Grove, WI where as a four-sport standout athlete at Brookfield Central High School, class of 1965, he earned a basketball scholarship to Regis University in Denver, CO. He graduated with a Bachelor’s Degree in 1969 from Regis University. In 2015 his athletic prowess earned him a spot in the Brookfield Central Hall of Fame. On August 11, 1967, he married the love of his life, Mary M. Leonard at St. John Vianney Catholic Church in Brookfield, WI. They celebrated their 52nd wedding anniversary in 2019. They have two sons, Jim and Jay. Bob started his career at Ryerson Steel as a salesman and in 1976 he accepted a district sales position with the company and moved the family to Green Bay, WI where he lived out the rest of his dream. He was the number one Ryerson-Central salesman for many years. Upon retiring from Ryerson in 2001 after 30 years Bob started his own business, Wille Material Solutions, where he worked until his full retirement in 2016. Throughout his years in Green Bay he was very involved in the community. He coached multiple sports teams for his sons as well as being a member of the Green Bay Officials Association where he was a referee and umpire for multiple WIAA sports for many years. In 1996 Bob’s football crew had the privilege to officiate the WI State football playoffs in Madison. In his free time from work and officiating, Bob spent as much time as he could fishing and hunting; a passion that runs deep with his family and friends. He was an avid outdoorsman who enjoyed spending time at the hunting cabin, Camp X, of which he was a founding member. He especially enjoyed sharing that passion with his grandkids, nieces and nephews. Camp X was his home away from home. As well as spending countless hours fishing on Green Bay, he also made annual trips with family and friends to Canada since the late 1970s. He will be dearly missed by his wife, Mary of Green Bay, WI; his two sons, Jim (Lisa) of Weston, WI, Jay of Green Bay, WI; four grandchildren, Patton (Kate) of Green Bay, WI, Sharissa (Jake) Doerpinghaus of Wausau, WI, and Jakob and Lukas of Weston, WI; two great-grandchildren, Max and Quinn of Green Bay, WI; his siblings, Rick, Mark (Mary Lou), and Penny (Al) Low; his sisters-in-law Rita (Steve) Jackson, Nancy Cote’, and Jackie (Paul) Czerwinski and many nieces and nephews. Bob was preceded in death by his parents, Richard and Margaret Wille, his in-laws, Robert and Garnabelle Leonard, and his sister-in-law Ann (Regan) Wille. Funeral services will be held on Monday, March 16, 2020 at Holy Cross Catholic Church, 3009 Bay Settlement Rd. Green Bay, WI 54311. Visitation will be held at 10 a.m. with a full Mass following at 11 a.m. The family would like to thank everyone for all of their thoughts and prayers during this difficult time. In lieu of flowers, the family will be making a donation to the Church in Bob’s name. Malcore Funeral Home is assisting the family with arrangements.

The family of Robert "Bob" L. Wille created this Life Tributes page to make it easy to share your memories.

Send flowers to the Wille family.