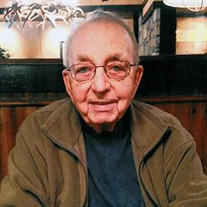 Robert “Bob” John Van Vonderen, age 96 formerly of Green Bay, passed away on Friday, January 29, 2021 at the Veterans Administration Home in Murfreesboro, TN. He was born on December 17, 1924 in Coleman, WI to the late Joseph Earl and Charlotte Augusta (Feak) Van Vonderen. He was united in marriage to Florence Mary Chiconas on October 31, 1954 at an Annunciation Greek Orthodox Church. Bob graduated from Coleman High School in 1942. He proudly served his country in the U.S. Army from March 4, 1943 to December 6, 1946, and had a rank of Sergeant when honorably discharged. Upon returning from service, Bob attended the University of Wisconsin for three years, taking classes in the insurance industry. He worked for Fireman’s Fund Insurance Co., and then as president for the Compensation Advisory Organization of Michigan until his retirement in March of 1983. In his earlier years, Bob enjoyed bowling, radio-controlled aircraft/boat construction and operation, as well as swimming. In the later years, Bob enjoyed fishing and traveling. He was a Red Cross Volunteer, and once in Green Bay, was a faithful member of Ss. Peter and Paul Catholic Church. Left to cherish Bob’s memory are his children, Mary Van Vonderen, James (Kristine) Van Vonderen and Kate (Chris) Pika; two grandchildren, Griffin (Courtney) Van Vonderen and Jillian (Bill) Grier; three step-grandchildren, Justin Pelto, Ross Pelto and Luke Pelto; three great- grandchildren; Oliver Van Vonderen, Theo Van Vonderen and Aidan Grier; and his siblings Dr. Vernon Van Vonderen and Sandy Huberty. Due to COVID-19, Bob’s family’s wishes are to have him placed next to his wife, Florence at Nicolet Memorial Gardens at this time, with the celebration of his life held at a future date in 2021. In lieu of flowers, Bob’s family would appreciate donations be made in Bob’s memory to the Coleman High School Athletics Fund, Attn: Douglas Polomis, 347 Business 141 N, Coleman, WI, 54112. Please notate that this is in memory of Robert Van Vonderen. All monies received will cover athletic participation fees for students in financial need.

The family of Robert "Bob" Van Vonderen created this Life Tributes page to make it easy to share your memories.