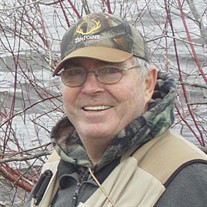 Robert “Bob” Donart, age 79 of Green Bay, passed away peacefully with his family by his side on Monday, January 11, 2021, after a long courageous battle with cancer. He was born on April 15, 1941 in Green Bay to the late James and Naomi (Sommerfeld) Donart. He was united in marriage to Marilyn Vandertie on July 9, 1966 at St. Louis Catholic Church in Dykesville, WI. Robert graduated from Premontre High School in 1959. After high school, he honorably served his country in the U.S. Army. He started his construction career working for a siding company alongside his brother. Eventually, the two branched off and started their own successful business, Donart Brothers Siding and Windows. Always a proud man who thrived on working hard and being in control, Bob was happy to be his own boss. He worked there until his retirement. Bob enjoyed watching all sports. His kids could never understand how he could sit and watch bowling tournaments or NASCAR races on TV for hours on end. He especially enjoyed watching his kids compete in sports through their high school and college years. Watching his boys compete against each other in football for UW-Whitewater and UW-Oshkosh was one of the many highlights of his life. He was an avid Packers, Bucks and Brewers fan and enjoyed attending Brewers games in Milwaukee with his daughter. One of his proudest accomplishments was passing his love and knowledge for hunting and fishing on to his two boys. Bob loved fishing, especially at “his trailer” on White Clay Lake and also enjoyed spending time with “the boys” at the hunting cabin in Amberg. Bob was always proud of the accomplishments of his children and grandchildren. Left to cherish his memory are his wife of nearly 55 years, Marilyn; children, Paul (Lynette) Donart, Rod (Tammy) Donart and Sherry (Brack) Gillespie; grandchildren, Annalise (Justin) Warner, Elizabeth (Zach) Baugnet, Kaitlyn, Daniel, Taylor and Logan Donart, and AJ and Brynn Gillespie; and great grandchild, Claire Warner. He is further survived by his siblings, Judy (Jim) Kirsten, Al (Darlene), David (Patti) and Steve (JoAnn) Donart; sister in law, Carolyn Zeise, and numerous nieces, nephews, cousins and other relatives. He was preceded in death by his parents; Marilyn’s parents, Eli (Dorothy) Vandertie; brother and sister in law, Gary (Anna) Donart; and brothers in law, Ronald and Warren Vandertie. Due to the pandemic, no formal services are being held at this time. A memorial service will be scheduled for Bob at a later date.

The family of Robert "Bob" Donart created this Life Tributes page to make it easy to share your memories.

Send flowers to the Donart family.