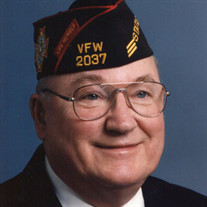 Robert "Bob" J. Collins, 91, Green Bay, passed away peacefully Thursday, April 7, 2022, while surrounded by his family. Born July 8, 1930, in Green Bay, he is the son of the late Frank and Myrtle (DuPont) Collins. Bob graduated from East High School, Class of 1948, and also from NWTC, as a millwright. He faithfully served his country in the US Army from June 10, 1951, until his honorable discharge on May 30, 1953. After completing basic training, he married the love of his life, Marge Rockey, on October 27, 1951, at Saints Peter and Paul Church. Bob then returned to the Army to serve in the Korean War. Following his honorable discharge, he was active in the VFW, serving various positions in his local Post, District, Brown County, Council, State and National VFW. He assumed the position of the State VFW Commander from 1997-1998. Bob also served for 11 years on the National Committee, 25 years on the District Committee. He served 25 years on the Time and Place Committee, selecting the sites and running the state and national conventions and the mid-winter conferences. He was proud to be a life member of VFW Post 2037, the D.A.V, The Military Order of the Cootie, Pup Tent #23, including working through all of Pup Tent #23 chairs. Bob also placed flags on the graves of veterans for Memorial Day ever since his first year of being a member of the VFW. Bob was a long-time employee at the former Northern Paper Mill. Bob was an active member of St. John the Evangelist Church and with many of their activities, including ushering. Bob was also involved with so many community groups, clubs, and associations. Bob was an avid Packer fan since he was 10 years old, season ticket holder, and attended the Ice Bowl and Mud Bowl. He enjoyed golfing, dart ball, and bowling on leagues. Bob was active in the Boy Scouts and the Order of the Arrow, Explorer Scouts, Northern Step Drill Team, and generally was always present at any adventure his children would partake. In retirement, he took great joy in his Christmas decorations that were part of many local tours. Bob is survived by his wife of 70 years, Marge; three children, John Collins (special friend, Sharon Cornelius), Colleen Roe (special friend, William Bergen) and Barb (Tom) Gellin; all of Green Bay; 13 grandchildren and 10 great-grandchildren; brothers, Milt (Carol) Collins, Merrill (Carol) Collins; sisters-in-law, Saundra Collins and Lorraine Rockey; special "son" Guillermo "Gil" and special "daughter", Christina; and many nieces and nephews, other relatives and friends. He was preceded in death by his parents; brothers, Marvin (Phyllis), Lester (Isabella), Irv, Gaylord "Giff", and Gary (Kathy) Collins; one sister, Joyce (Jerry) Buchanan; along with nieces and nephews. Visitation at Malcore (West) Funeral Home, 1530 W. Mason Street, Monday, April 11, 2022, from 4-7 pm. Parish Wake service, 7 pm, Monday, at the funeral home. Visitation to continue, Tuesday, April 12, 2022, at St. John the Evangelist Church, 427 St. John Street, from 9:30 am until the time of the funeral. Funeral Mass, at 11 am, Tuesday at the church with Rev. Brian Belongia officiating with full military honors to follow at the church. Entombment in the Shrine of the Good Shepherd Mausoleum, 2770 Bay Settlement Road. Bob's family extends a special thank you to Dr. Daniel Lemkuil and his staff and to the caring staff of Unity Hospice.

The family of Robert "Bob" J. Collins created this Life Tributes page to make it easy to share your memories.

Send flowers to the Collins family.