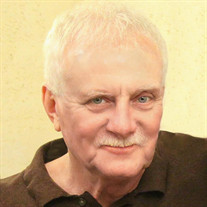 Robert J. “Bob” Beno, 73, Green Bay, passed away Monday morning, January 17, 2022, at a local hospital with his family at his side. Born October 1, 1948, he is the son of Katherine Beno and the late Donald Beno. Bob is a graduate of East High School, Class of 1967. He faithfully served in the US Army in Vietnam and was honorably discharged in 1971. Bob married the former JoAnn M. Maricque on December 29, 1968, at Saints Peter and Paul Church. He was a dedicated employee of Packerland Packing for 43 years, working in the maintenance department, retiring in 2012. In retirement, Bob enjoyed working at the Salvation Army Kroc Center. He will be remembered as a total Packers fan; selling programs as a teenager, eventually becoming an usher at the stadium for 30 years before becoming a season ticket holder. He loved spending time with family, caring for his home and yard, and watching the various wildlife that would come to visit. Bob’s favorite trip was when his daughters took he and their mom to Washington, DC in 2019 to celebrate the couple’s 50th wedding anniversary. While viewing the Vietnam Veterans’ Memorial, he was approached, honored, and recognized with a pin for his service in Vietnam. Bob is survived by his wife of 53 years, JoAnn; three daughters and sons-in-law, Bobbi and Brian Schaetz, Jennifer and Jason Vander Zanden, and Jami and Dan Tilly; eight grandchildren, MacKayla and Brandon Schaetz, Bethani (Ryan) Gerhartz, Mara and Kole Vander Zanden, Ava, Asher, and Auden Tilly; two great-grandchildren, Beckam and Cora Gerhartz. Also survived by his mom, Katherine Beno; four sisters, Cindy (Tony) Canadeo, Kathleen (Kelly) Langley, Mary (Dave) Vanderkin, and Peggy (John) Pfeiffer; many nieces and nephews, other relatives and friends. He was preceded in death by his son, Jay; dad, Donald; and brother, Craig. Visitation at Malcore (East) Funeral Home, 701 N. Baird Street, Friday, January 21, 2022, from 9-11am. Funeral service 11am Friday at the funeral home with Deacon Bernard Terrien officiating. Full military honors to follow. Burial in Allouez Catholic Cemetery. Family encourages anyone in attendance please wear a mask.

The family of Robert "Bob" J. Beno created this Life Tributes page to make it easy to share your memories.

Send flowers to the Beno family.