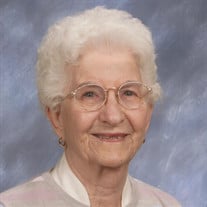 Rita M. (Vanness) Strebel, 98, Green Bay, passed away on October 1, 2017 surrounded with the love of her family. Born on July 4, 1919, she is the daughter of the late Henry and Mary (Loritz) Vanness. She married Fred at St. Joseph Church in Champion on June 11, 1941; he preceded her in death on March 11, 1999, and they shared 57 wonderful years together. She was a long-time member of SS. Peter and Paul Parish and the Ladies Altar Society. Rita was a homemaker who baked, canned, and sewed for her family. Her pizzelles will be missed by those lucky enough to taste them. Rita and Fred enjoyed bus trips with friends; a visit to Fatima and Belgium, where she connected with relatives and new friends who would come to visit Green Bay. She was proud to be born on July 4th. She often commented, “Everyone celebrates my birthday.” She was our firecracker! The rosary was important to her and praying for her family and those in need. For many years she was on the prayer chain for her church. Close to Rita’s heart was the “Chapel” (aka: The Shrine of Our Lady of Good Help). It is located near her family’s farm and as a young girl she would participate in the processions. Her family made many visits over the years bringing her there when she was able to travel. Near their farm was Elm Grove School, a one-room school, which Rita attended. She was a loving wife, mother, grandmother, sister, aunt, and friend and she will be deeply missed. She is survived by her four children, Mary Lee Gibson, Wayne F. (Lynn) Strebel, Susan (Steven) Pamperin, all of Green Bay, and Lori (Bradley) Rice, St. Cloud, MN; five grandchildren, Nicole (Paul) Marinin, Kory Strebel, Green Bay, Kara Gibson (Roy Waterman), Rochester, MN, Alicia Pamperin (fiance Bryan Previte), Waukesha, and Christopher Pamperin, Green Bay; sister-in-law, Marjorie Vanness and nieces and nephews. She was preceded in death by her husband, Fred; one son-in-law, David K. Gibson; six brothers and three sisters-in-law, George (Dorothy), Harry (Dorothy), Frank, Raymond, Alfred (Virgil), and Richard; two sisters and two brothers-in-law, Lillian (Walter) Prevost, and Orpha (George) Vincent. Fred’s family: brothers-in-law and sisters-in-law, Clarence and Myrtle, Arthur and Ellen, Henry and Mabel, Edward and Irene, Alvin and Lucy, Donald and Irene Strebel, Delia (Paul) Caelwearts, Julie (Jim) Basten, Evelyn (William) Streckenbach, and Mary Ann (Myron) Arnoldi; father and mother-in-law, Michael and Minnie Strebel. Friends may call at Malcore (East) Funeral Home, 701 N. Baird St., Thursday from 5-8 p.m. Rosary 7:00 p.m. Thursday at the funeral home. Visitation will continue Friday at the funeral home from 9:00 a.m. until the procession to church. Mass of Christian Burial 10:30 a.m. Friday at Saints Peter and Paul Church, 710 N. Baird St., with the Rev. Anthony Cirignani, OFM officiating. Entombment at Allouez Chapel Mausoleum. Rita’s family wishes to thank the caregivers from Home Instead, as well as the staff at Unity Hospice and the Unity Residence and the volunteer drivers for Meals on Wheels for the kindness and compassion they showed to our mother.

Rita M. (Vanness) Strebel, 98, Green Bay, passed away on October 1, 2017 surrounded with the love of her family. Born on July 4, 1919, she is the daughter of the late Henry and Mary (Loritz) Vanness. She married Fred at St. Joseph Church in... View Obituary & Service Information

The family of Rita M. Strebel created this Life Tributes page to make it easy to share your memories.

Send flowers to the Strebel family.