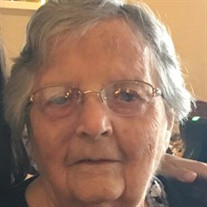 Rita Banta, age 93, died peacefully on January 25, 2020, after a short illness. Born Rita Van Rens on June 9, 1926 in Green Bay, she was the daughter of Winfred and Alma (Heim) Van Rens. She married Merrill (Bud) Banta on June 15, 1946 following his discharge from the Navy after World War II. Bud preceded her in death on April 11, 1999. Bud and Rita had four children, all of whom survived them: Sue (Anthony) Peters of Green Bay, Steve (Greg Eichhorn) of Green Bay, Linda (Steve) Arkin of Columbus, Wisconsin, and Jane (Rizek) Abed of Palos Hills, Illinois. They are also survived by five grandchildren: Matt (Monica) Peters of West Granby, Connecticut, Kristin (Ryan) McEneany of Darboy, Jason Bomber of Madison, Ashley Abed of Westmont, Illinois, and Sam Abed of Palos Hills, Illinois. They are also survived by four great-grandchildren, Emma and Lauren McEneany and William and Xander Peters, and brother-in-law Norman Pitsch and sister-in-law Lorraine Banta-Murray. Rita was preceded in death by her sister and brother-in-law, Dorothy and Clarence Van Straten, and brothers-in-law and sisters-in law, Corrine Pitsch, Eugene and Arliss Banta, Richard and Patricia Banta, Joyce and James Murray, Elizabeth (Betty) and Clayton Baeten, and Edward (Jimmy) Banta. Rita enjoyed spending time at the family cabin in Mountain and loved to bake, crochet, and embroider. She especially loved her grandchildren and great-grandchildren and carried on the holiday baking traditions. She and Bud were members of SS. Peter & Paul Parish, where they were both baptized and attended grade school and where they baptized and educated their own children. The family wishes to thank the caring staff of Renaissance Assisted Living and Unity Hospice. Rita also expressed her appreciation to Terry Harris, her next-door neighbor for more than 20 years, who visited her often, and family friend Dan De Bauche who brought communion to her when she was no longer able to attend Mass. Rita’s wake will be held at Malcore Funeral Home, 701 North Baird Street, Green Bay, on Thursday, February 6, 2020, from 4:00 to 7:00 pm, with a prayer service at 7:00 pm. Visitation will continue at SS. Peter & Paul Church, 710 North Baird Street in Green Bay, at 9:30 am on Friday, February 7, 2020, with Rita’s mass of Christian burial to follow at 10:30 am. Memorial donations may be made to Bay Beach Wildlife Sanctuary.

The family of Rita Banta created this Life Tributes page to make it easy to share your memories.

Send flowers to the Banta family.