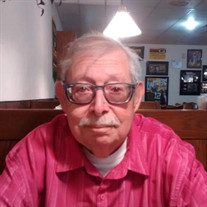 Richard T. Terrien, 82, of Green Bay, peacefully passed away Monday, May 31, 2021 surrounded by his family. He entered life in West De Pere on January 5, 1939, and was the youngest of five sons. He was class president of Peshtigo High School for the class of 1958 and was nicknamed by his peers as “Bull Roar”. Upon graduating high school, Richard joined the U.S. Army where he was stationed on the east coast, Germany and Luxembourg. After 3 years in the army, he returned to Wisconsin and worked for Mirro Aluminum Company in Manitowoc where he worked in receiving and as a checker. While working for Mirro he met his soon to be wife, Jacquelynn “Jackie” Franz. During the ’66 strike at Mirro, he then moved to Green Bay where he worked for the Press Gazette where he met Jackie again and got married on November 26, 1966. They spent almost 55 years together until he departed this world. After going on strike with the Press Gazette in 1972 he became one of the original workers of the newly formed Green Bay News Chronicle—it was also during this time that he ran for Green Bay Alderman. After working at the Chronicle for a few years he then decided to work for the Green Bay Board of Education where he was a custodian for several K-12 schools in the Green Bay area. After his retirement he worked for Home Instead, helped raise his grandchildren and great-grandchildren. At an early age he learned to play the accordion and loved to play it at special occasions, marsh burnings, get-togethers, and at the wedding of daughter Julie. He loved his cigars and sitting on a chair in front of the house “watching the world go by” and chatting with his neighbors. As his chair grows cold it will always hold special memories of times well passed. Richard is survived by his wife Jacquelynn, his daughter Jodi Hanley-Terrien, his granddaughters Lauren Randall and Anastasia Gerou. Additionally, he is survived by his great-grandchildren John and Lawrence Randall, James and Levi Bay, and Jazmin Gerou. He is further survived by numerous relatives and friends. Preceding Richard in death were his daughter, Julie Terrien, parents Bernard and Louise Terrien, his brothers Eugene (Patricia) Terrien, Gorden (Evelyn) Terrien, Valerian Terrien, Ralph Terrien, nephew Jeff Terrien, Sister-in-law Johnna (John) Van Ells and Brother-in-law Roger Mrozinsky. Visitation at Malcore Funeral Home, 701 N. Baird St., Sunday June 6, from 4 PM until 8 PM. Wake Service to take place at 7 PM at the funeral home. Visitation will continue Monday, at Saints Peter and Paul Catholic Church from 10 AM until the time of the Mass of Christian Burial at 11 AM. After full military honors, his final resting place will be in Allouez Chapel Mausoleum. The family wishes to extend an extremely heartfelt thank you Richards’ niece, Tina Wauters, for her generous companionship to him during his last few years. He truly looked forward to their outings and exploring new restaurants. A special thank you is also extended to Aurora and their hospice team for their compassionate and gentle care during his last few days.

Richard T. Terrien, 82, of Green Bay, peacefully passed away Monday, May 31, 2021 surrounded by his family. He entered life in West De Pere on January 5, 1939, and was the youngest of five sons. He was class president of Peshtigo High School... View Obituary & Service Information

The family of Richard Terrien created this Life Tributes page to make it easy to share your memories.

Send flowers to the Terrien family.