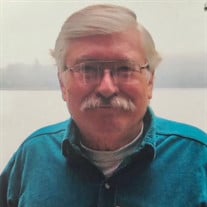 The world has lost an impassioned environmentalist with the passing on March 7, 2019 of Dr. Richard W. Presnell, Ph.D at age 85. An outdoor enthusiast, wood carver and waterfowl hunter, Dick's appreciation of nature and vision of Earth's human population in balance with its ecology, was embodied by his teaching at UW-Green Bay. Dick was born March 4, 1934 to Dr. William H. and Helen M. Presnell in Iowa where he grew up. He attended Cornell College of Iowa then served in the Army, stationed in Japan for two years during the Korean conflict. Upon his return he married his high school sweetheart, Sandra Hulting, then attended the University of Iowa to complete his undergraduate and later his master’s degree. The couple welcomed daughter Kathy and soon thereafter moved to Virginia, Minnesota, where Dick began his teaching career in the middle school. With his interest and qualifications in science, he assumed a position on the faculty of Mesabi Range College. Daughters Krista and Karen joined Kathy and the family, led by Dick, enjoyed many outdoor activities including camping, hiking, canoeing, skiing and ice fishing in beautiful northern Minnesota. When Dick received a grant to study at Cornell University, the family moved to Ithaca, New York. In addition to his studies, Dick also took time to participate, to the delight of his daughters, as an "honorary" Girl Scout leader, joyfully chasing through the woods at camp on a mission to teach the troop all about nature. In 1971, he completed his doctorate in environmental education and accepted a position with the Education faculty at UW-Green Bay until he retired in 1996. It was here that he developed a summer course, taking students on extended backpacking trips to the Boundary Waters Canoe Area of Minnesota. He also taught classes at The Clearing and conducted field trips at The Ridges Sanctuary in Door County. Throughout their lives together, Dick and Sandy travelled extensively, visiting 49 states, all 10 Canadian provinces, Europe and New Zealand. Living by the beautiful waters of Green Bay, they bought a boat and taught themselves how to sail. Happy wanderings between their retirement home in Door County and a cabin on Lake Constance in Canada kept the couple in harmony with each other and with nature for their sunset years. It was in Canada that Dick carved and painted most of the intricate birds and decoys he gave as gifts to those he loved and donations to causes he supported. Along with the carvings, over the years he hand crafted wonderful wooden creations for his beloved grandchildren, from their first pull-toys to a complete doll house. His dedication to the restoration and preservation of the natural world has been passed on to another generation of committed environmentalists through his students, colleagues and family. On another note to Canada Geese, you are safer now. Dick is survived by his loving wife of 62 years, Sandy; three daughters, Kathy Presnell of Bayfield, Krista Buckner of De Pere, and Karen Presnell (Jim Cretton) of Green Bay; five grandchildren, Ezra Turcotte, Reid and Ray Buckner, and Quinn (Audrey) and Paige Cretton; sisters, Laurel Upshaw of Tulsa, Okla. and Helen McClean of Iowa City; Iowa; brother-in-law Dr. Jon Hulting; dear nieces, nephews, cousins and many special friends. In addition to his parents, he was preceded in death by an infant grandson, Isaiah Turcotte. In lieu of flowers, please donate to an environmental non-profit such as Aldo Leopold Foundation or Door County Land Trust in Dick’s memory. A celebration of Dick’s life will take place at Barkhausen Waterfowl Preserve located at 2024 Lakeview Drive, Suamico, WI, 54173, on Sunday, May 19 from 11 a.m. to 3 p.m. A very special thank you to grandson Ezra, for his months of loving and tender home care of his grandpa. Heartfelt thanks to the dedicated caregivers and Dr. Demery at Wyndemere Assisted Living and the kind nursing staff at Unity Hospice, who provided peace and comfort to Dick in his final days. Sincere thanks also for the caring ER and ninth floor medical teams at St. Vincent Hospital in Green Bay. Malcore (East) Funeral Home is serving the family.

The world has lost an impassioned environmentalist with the passing on March 7, 2019 of Dr. Richard W. Presnell, Ph.D at age 85. An outdoor enthusiast, wood carver and waterfowl hunter, Dick's appreciation of nature and vision of Earth's human... View Obituary & Service Information

The family of Dr. Richard W. Presnell Ph.D created this Life Tributes page to make it easy to share your memories.

The world has lost an impassioned environmentalist with the passing...

Send flowers to the Presnell family.