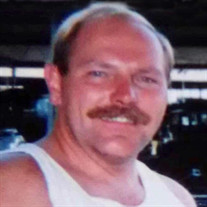 Richard R. (Dickie) Hawkes, 61, of Green Bay, died Friday, July 13, 2018. He was born in Minneapolis, MN on September 3, 1956 to the late Thomas and Harriet (Chaffee) Hawkes. He owned Dick Hawkes Classic Painting and worked as a painting contractor in both the San Francisco Bay (where he loved living on his boat in Alameda) and Green Bay areas for the majority of his life. He is survived by his love and light, Ann Marie Laes, Green Bay; brother, Tom (Anita), Vallejo, CA; sisters, Barbara Jane (Karl) Hokanson, Fresno, CA and Aurele Palou, Vista, CA; along with his faithful companion, Louie, who surprised everyone by becoming an excellent mobility dog to "daddy." He was preceded in death by his sister Elizabeth (Niki) Hawkes. And, no doubt, was greeted again with a bounding knock down from Bob-the dog! Dick will be remembered for his huge personality, confidence, ambition, infectious laugh, love of ducks and dancing, along with everything else that made him the person he was. He put up a good fight for many years and Dick and Ann Marie were able to live out their promise to each other that as long as he kept trying, she would keep trying for him. A Celebration of Life will be held on Wednesday, September 5th at Malcore Funeral Home-West side, 1530 W. Mason St. Visitation for family and friends begins at 5pm. Pastor Mike Huff and Bart Wolf will be conducting the musical service at 6:45pm. In lieu of flowers, a memorial for Dick is being established. We gratefully acknowledge all four local hospitals who assisted in Dick's recovery, particularly the staff of Aurora Baycare, "Dick's Chicks" at Bellin Rehab, valet and custodians at St. Mary's, UW Hospital-Madison medical teams, whose ability to pull Dick through the most dire straits was nothing short of miraculous, Clearview Brain Injury Center, County Rescue, and those at Manor Care West who provided genuine good care to Dick. You have all been Rock Stars!

The family of Richard "Dickie!" Hawkes created this Life Tributes page to make it easy to share your memories.

Send flowers to the Hawkes family.