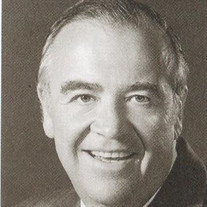 Richard Merlin Bush of Green Bay, WI passed away during his sleep the night of August 27, 2019. He was born on March 16, 1928 in Cuba, New York to Merlin G. Bush and Ruth H. Bush. He was preceded in death by his wife Joyce Freberg Bush on November 15, 2015. Dick grew up in Green Bay, WI and spent most summers at Shore Acres. During one summer he helped dig the basement for one of Atlas Cold Storage’s Warehouses that would eventually become the first cheese processing facility for the L.D. Schreiber Cheese Co. in Green Bay. After graduation from the University of Wisconsin-Madison in 1950 with a degree in Dairy Science, his first job was working in the lab at Schreiber Cheese, supervising quality control and running the blending operations. But his real passion was Sales and Marketing. In 1958 he became Sales Manager and in 1982 Executive Vice President of Sales at Schreiber Cheese. Dick was one of the initial 13 investors who bought out Mr. Schreiber to form the company that is now known as Schreiber Foods. He helped shape the sales force into a dominating factor in the world of processed cheese, eventually becoming one of the largest in the nation. While at Schreiber Cheese he was a founder and President of the Wisconsin Cheese Seminar now known as the International Dairy, Deli and Bakery Association. Dick also served as a Director, Vice President and member of the Executive Committee of the National Cheese Institute. Outside of work he also was a director of Associated Bank, Larsen Canning Company and the Manitowoc Maritime Museum. In 1982 he retired from Schreiber Foods but maintained his position as member of the Board of Directors. In the mid 80’s he bought an ingredient mixing and packaging company in Sheboygan called Enzo Jell that is now known as Subco Foods. Pancake mix was now the standard breakfast fare at home but still never surpassed cheese as the snack for all occasions. After a few years he sold the company so he could spend more time with Joyce sailing or vacationing on Marco Island Florida. Dick enjoyed many activities including golf, tennis, duck hunting, water skiing, snow skiing, motor boating and of course sailing and sailboat racing. During Dick’s early years he enjoyed flying his single engine airplane from Green Bay to Wausau to pick up his soon to be bride Joyce Freberg, for weekend trips to Green Bay and to his parent’s cottage at Shore Acres. Dick and Joyce were married on July 14, 1956 in Ironwood MI. They were inseparable and spent as much time together or with family as they could. Most of Dick’s leisure time was spent motor boating or sailing with family or friends. These trips took him and family to the Virgin Islands, the Bahamas, the Intercostal Water Way from Miami to Sturgeon Bay, the North Chanel in Canada and to the wonderful ports across Lake Michigan. Later in his life Dick and Joyce would spend as much time as possible at their cottage on Cabot’s Point in Sturgeon Bay. There he was able to sail, go motor boating or just watch the day sail by. Many holidays and weekends have been spent there with family including grandchildren and great grandchildren. Dick also kept active at Union Congregational Church as a deacon and teaching bible classes. He also enjoyed raising funds for both United Way and Union Congregational Church. He was a member of the local Power Squadron organization eventually obtaining his Celestial Navigation and Advanced Piloting Certifications. Dick is survived by his children and their spouses; Barbara (Ben) Miller of Green Bay, William (Nancy) Bush of Neenah and Daniel (Amy) Bush of Orinda CA. Grandchildren; Liz Miller Raljevic, Will (Haley) Miller, Jordan Bush, Alex Bush, Michael Bush and Madeline Bush. Great grandchildren; Sofia Raljevic and Amelia Raljevic. Brother; Robert (Carol) Bush of Green Bay. Sister Virginia (Roy) Zimmer of Spokane. Brother-in-law; Dr. Lloyd Allen of Manitowoc. Many nephews and nieces. And of course, his companion for many years, his dog Jackie. Dick was blessed with wonderful caregivers from Home Instead, nurses from Unity Hospice and Dr. Daniel Koster. We do thank you from the bottom of our hearts for your loving care and kindness. In lieu of flowers donations can be made to Bellin College of Green Bay or Unity Hospice of De Pere. Visitation will be held on Saturday, September 21, at Union Congregational Church, 716 South Madison Street, Green Bay at 10:00AM with a service to follow at 12:00 at the church. Following the service there will be a reception at Northland Hotel, 304 N Adams Street.

Richard Merlin Bush of Green Bay, WI passed away during his sleep the night of August 27, 2019. He was born on March 16, 1928 in Cuba, New York to Merlin G. Bush and Ruth H. Bush. He was preceded in death by his wife Joyce Freberg Bush on November... View Obituary & Service Information

The family of Richard Merlin Bush created this Life Tributes page to make it easy to share your memories.

Richard Merlin Bush of Green Bay, WI passed away during his sleep...

Send flowers to the Bush family.