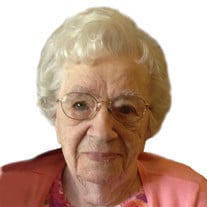 Regina T. Goral, 99 ½, Green Bay, died peacefully at a local nursing home on Saturday, February 17, 2018. Born on August 17, 1918, in the Green Bay area, she is the daughter of the late Adam and Anna (Piechota) Ostrenga. On June 5, 1943, she married Andrew Goral at Saints Cyril and Methodius, and he preceded her in death in August 1981. Regina worked as a cook at Eddie Whipp’s for many years, as well as various other jobs for family and in the community. Most of all, Regina cherished times spent with her beloved grandchildren. She was proud of her Polish heritage, and she enjoyed listening and dancing to polka music. Regina was a devout Catholic who prayed the rosary daily (even her short rosary). She loved cooking for her family, making pierogies, czarnina, peanut cakes, and lemon pies. Regina is survived by three children, Janet (Kenneth) Wavrunek, Denmark, Wayne (Mary) Goral, New Franken, Bev Goral, Green Bay; five grandchildren, Brian (Lori) Wavrunek, Carla (Scott) VanDenHeuvel, both of Denmark, Paul (Nikki) Goral, Thomas (Suzy) Goral, both of New Franken, and Maria (Russell) Toppel, Goodyear, AZ; ten great grandchildren, Travis and Trevor, and Brandon Wavrunek, Matt and Jake VanDenHeuvel, Evan and Wyatt Goral, Carlene and Miranda Goral, Thomas Wayne Toppel; and many nieces and nephews, in particular, her special nieces, Marlene Danielski, who visited frequently to converse in Polish, and, Barb Libert. She was preceded in death by her husband; twelve siblings and their spouses, Raymond (Mary) Ostrenga, Joseph (Antonette) Ostrenga, Walter (Anna) Ostrenga, Peter Ostrenga, Frank Ostrenga, Felix (Lucille) Ostrenga, Bernice (Frank) Petasek, Rose (Frank) Jurczykowski, Violet (Walter) Saharsky, Anna (Peter) Piontek, Antonette (Casmier) Piontek, Gertrude (Bernard) VandenAvond; and 13 brothers-in-law and sisters-in-law. Visitation at SS. Peter and Paul Church, 710 N. Baird St., Thursday from 9:00 a.m. until the time of the funeral. Mass of Christian burial 10:00 a.m. Thursday at the church with the Rev. Bill O’Brien officiating. Burial at SS. Cyril and Methodius Cemetery. The family would like to extend a special thank you to the staff at Odd Fellow Home for the wonderful care provided to our Mom – you will all be in our hearts forever. Thanks also, for our dear sister Bev, for her faithful daily visits and warm affection for our mother, leaving by saying, “Mom, I love you all day and all night.” “Dobranoc” (Good Night)

The family of Regina T. Goral created this Life Tributes page to make it easy to share your memories.

Send flowers to the Goral family.