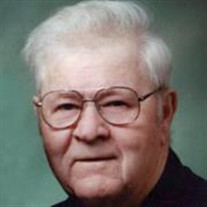 Raymond “Ray” Jacobs, 82, of Luxemburg, passed away at home surrounded by family, February 10, 2018, after a long time struggle with his health. Born on January 31, 1936, in New Franken, he is the son of the late Albert and Mamie Jacobs. Ray married the former Rosemary Taylor on August 9, 1958, at Holy Cross Church in Bay Settlement. He is the proud father of nine children and especially proud of his eight grandchildren. Ray was a co-owner of Jacobs Construction for over fifty years. He had a love for woodworking, and spending time with his family. Ray was known for being fun loving and having a great sense of humor. He was an avid card player, a connoisseur of beer, and having fun. Ray is survived by his wife, Rosemary; four children, Chris (Scooter) Mueller, Rob (Virgie) Jacobs, Raelynn (Jason) Jakkola, Rosie (Paul) Madary; eight grandchildren, Matt and Jayme Jervis, Marissa and Mariah Jacobs, Dexter and Peyton Jakkola, Sam and Maya Madary. He was preceded in death by two infant sons; son, Raymond Jacobs, Jr,; two daughters, Cheryl (Lay) Jacobs, Cynthia (Jervis) Jacobs and nine siblings. Visitation at Malcore East Funeral Home 701 N Baird St Wednesday February 14, from 4 PM until 8 PM. Parish Wake Service at 7:30 PM. Visitation will continue Thursday, February 15, at St Joseph’s in Champion, 5996 County Rd K, from 10 AM until the time of the Mass of Christian Burial at 11 AM. Entombment at Nicolet Memorial Gardens. The family would like to extend a special thank you to the staff of Unity Hospice especially Gwen.

The family of Raymond "Ray" Jacobs created this Life Tributes page to make it easy to share your memories.

Raymond “Ray” Jacobs, 82, of Luxemburg, passed away at home surrounded...

Send flowers to the Jacobs family.