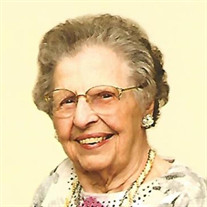 Phyllis Jean (Krueger) Schoeneck, Green Bay, went home to Jesus the morning of April 20, 2020 at the age of 95. Phyllis was born on November 21, 1924 in Merrill, Wisconsin to the late Emil Krueger and Emily (Kretlow) Krueger. On December 26, 1924 Phyllis was baptized into God’s family and on October 31, 1937 she confirmed her faith – both at St. Paul’s Lutheran Church in Gleason, Wisconsin. On July 7, 1945 she married Oscar Schoeneck at St. John Lutheran in Enterprise, Wisconsin. Phyllis and Oscar lived most of their married life in Rhinelander, Wisconsin. They had three sons: Gary, Gregg and Tim. After Oscar’s death in 1980, she married Eugene Schoeneck on October 15, 1988 at St. John's Lutheran Church, Prairie du Sac, Wisconsin. They also resided in Rhinelander. Phyllis was preceded in death by her husband, Oscar Schoeneck; son, Gary Schoeneck; husband, Eugene Schoeneck; parents, Emil and Emily (Kretlow) Krueger; brother, Harris (Gladys) Krueger. Phyllis is survived by her daughter-in-law, Linda Schoeneck of Oshkosh; son, Gregg (Cheryl) Schoeneck of Oshkosh; son, Timothy (Rebecca) Schoeneck of Green Bay; 11 grandchildren (and spouses); 11 great-grandchildren. Phyllis was dearly loved in all her titles: Wife, Mother, Grandmother, Great Grandmother, Aunt and God Mother. She was affectionately known as “Mom Schoeneck” to scores of young friends, many of whom became pastors, world missionaries and Christian teachers. Not only did she care for both of her husbands through many years of prolonged sickness, she also brought in her Mother, Father and Aunt to live with her when their health began to fail. She played a wonderful, loving role in the upbringing of each of her grandchildren. She loved her Savior Jesus and left a legacy to her family of spreading the Good News: “Jesus loves you. Jesus forgives you. Jesus will take you home someday. Simply believe.” On that recent April morning her faith moved from her heart to her eyes as they lit up with joy, followed by a gasp of wonder, and topped off with her amazing, loving and now so peaceful smile. “Precious in the sight of the LORD is the death of his faithful servants.” (Psalm 16:15). Thank you to Kris and Melissa at Cottonwood Manor as well as the staff of Southern Care Hospice for the loving care they gave. Due to the existing quarantine, a memorial service open to the public will not be possible at this time. Thank you to Pastor Leon Ehlert of Beautiful Savior Lutheran Church and Norv Krug of Malcore Funeral Home for working together on a recorded memorial service which will be available later this week at: www.beautifulsavior.com and visit the “Church Service Recordings”. In lieu of flowers, the family asks that memorials be sent to Malcore Funeral Home for Northland Lutheran High School in Kronenwetter, Wisconsin – a school that Phyllis and Oscar were instrumental in founding. Malcore (West) Funeral Home, is serving the family.

Phyllis Jean (Krueger) Schoeneck, Green Bay, went home to Jesus the morning of April 20, 2020 at the age of 95. Phyllis was born on November 21, 1924 in Merrill, Wisconsin to the late Emil Krueger and Emily (Kretlow) Krueger. On December... View Obituary & Service Information

The family of Phyllis J. Schoeneck created this Life Tributes page to make it easy to share your memories.

Send flowers to the Schoeneck family.