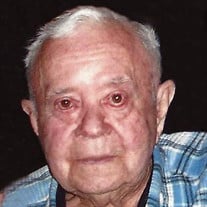 Peter Stary, 97, Green Bay, died peacefully at a local retirement community on July 5, 2017. Born on March 28, 1920, he is the son of the late Joseph and Anna (Krt) Stary. He married the former Viola (Braedel) Van Roy on June 10, 1953 at St. Francis Xavier Church, and she preceded him in death in 1994. Peter proudly served in the United States Air Force in the Asian Pacific. He worked at Hurlbut Concrete for most of his career. Peter enjoyed traveling, fishing, and watching the Packers. He was also an avid vegetable gardener and harvester; selling his vegetables at farmers market and from his home. Peter is survived his stepdaughter, Doris (Warren) (Van Roy) Truttmann, Hobart; three step-granddaughters, Sandra (William) Neumeyer, Debra Herman, both of De Pere, and Sharon (Thomas) Kennedy, Hobart; and many additional extended family. He was preceded in death by his wife, Viola; six brothers, John, Joseph, James, Emil, Frank, and George Stary; and one sister, one sister, Mary Hart; and two step-grandsons, David (Annie) Truttmann and Michael Herman. Visitation at Saints Peter and Paul Church, 710 N. Baird St., Saturday from 9:00 a.m. until the time of the funeral. Mass of Christian Burial 10:00 a.m. Saturday at the church with the Rev. Anthony Cirignani, OFM officiating. Burial and military honors at All Saints Cemetery in Denmark. Malcore (East) Funeral Home and Crematory is assisting the family, 432-5579.

The family of Peter M. Stary created this Life Tributes page to make it easy to share your memories.

Send flowers to the Stary family.