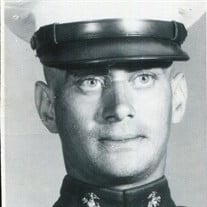 Patrick A. Tank, 77, Oconto, passed away late Friday, December 18, 2020, at a Clintonville, WI nursing home. Born August 18, 1943, in Green Bay, he is the son of the late Frederick Tank and LuVerne (Wilson) Tank-Gray. Pat faithfully served in Vietnam as a US Marine. Pat will be known as a man with a strong work ethic and a guy that would do anything for his parents. Pat is survived by his daughter, Patty Ann (Mike) Patrick; grandchildren, Lincoln Anderson, Sophie Anderson, Riley Patrick and Makenzie Patrick; four brothers and three sisters-in-law, Glenn (Cindy Lee), Black Creek, Dave (Cindi), Robert and John (Bonnie), all of Green Bay; one sister and brother-in-law, Lil and Gordy Vandermoss, Sr., Suamico; numerous, nieces, nephews, aunts, uncles, and friends. He was preceded in death by his parents; brothers, Freddie and Donald “Shorty” Tank; and two infant brothers, Rodger and Michael. Private family services were held at Malcore (East) Funeral Home with burial in Nicolet Memorial Gardens. Services will be held when the health environment is safe to gather in larger groups with full military honors.

The family of Patrick A. Tank created this Life Tributes page to make it easy to share your memories.

Send flowers to the Tank family.