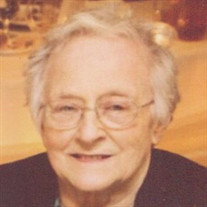 Patricia (Pat) Mary Wright, 91, passed away with family by her side on Thursday January 23, 2020 at her daughter and son-in-law’s home in Sussex, WI. Born December 7, 1928 in Green Bay she is the daughter of the late Edward and Luella (Hussin) Plog. Pat was a graduate of Green Bay East High School and attended the College of St. Scholastica in Duluth, MN. She was united in marriage to Ervin Wright on November 24, 1949. Erv was co-owner of Wright Industrial Supply in Green Bay. He preceded Pat in death December 19, 2010. Pat enjoyed going up north and spent countless hours getting their cottage and grounds the way she wanted it for her family. She was a lifelong member of SS. Peter & Paul and active in their family prayer night. Pat enjoyed playing bridge and flower gardening. She was a supporter for various charities, with Wounded Warriors Family Support being one favorite. Pat is survived by, five children: Jeff Wright, Paula (Jim) Wright, Mary (Bob) Puissant, Joe (Robin) Wright, Jean (Jon) Schnell, 13 grandchildren: Michael Puissant, Madeleine (Kyle) Jacobson, Marie (Dan) Kaufman, Bernadette (James) DeRoche, Joe Puissant, Margaret Puissant, Clare Puissant, Jennifer (Matt) Heeren, Jaime (Nick) Faus, Ashley (Mike) Welz, Andrew (Katie) Schnell, Ryne Schnell, Melissa Schnell, and 9 great-grandchildren, one brother: Paul Plog, nieces and nephews. Also preceded in death by her daughter: Margaret Mary, and one brother: Edward Plog. Friends and family may visit at Malcore Funeral Home, University Avenue at Baird Street on Wednesday, January 29, 2020 from 9:30am until the time of the funeral. Funeral 11 A.M. Wednesday at SS. Peter and Paul. Burial in Fort Howard Cemetery. Grateful to anyone who was personally in contact during Patricia’s disability of some six years, the family further extends its gratitude to all compassionate caregivers at the various facilities. In lieu of other expressions of sympathy donations may be made to Wounded Warriors Family Support.

Patricia (Pat) Mary Wright, 91, passed away with family by her side on Thursday January 23, 2020 at her daughter and son-in-law&#8217;s home in Sussex, WI. Born December 7, 1928 in Green Bay she is the daughter of the late Edward and Luella... View Obituary & Service Information

The family of Patricia Wright created this Life Tributes page to make it easy to share your memories.

Patricia (Pat) Mary Wright, 91, passed away with family by her...

Send flowers to the Wright family.