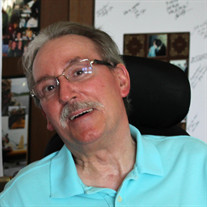 It is with great sadness and heavy hearts that our brother Niles J. Delfosse, 68, of Green Bay, passed away peacefully at Clement J. Zablocki Spinal Cord Injury Center, Milwaukee, Wisconsin on June 6, 2017 with family at his side. Niles was... View Obituary & Service Information

The family of Niles Delfosse created this Life Tributes page to make it easy to share your memories.

It is with great sadness and heavy hearts that our brother Niles...

Send flowers to the Delfosse family.