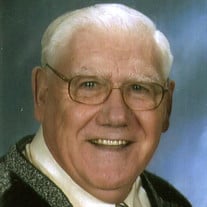 Myron Charles Radart, 85, passed away August 1, 2020. Born November 25, 1934 in Sugar Bush, Town of Humboldt, he is the son of the late Joseph and Anna (Arvey) Radart. Myron graduated from Luxemburg High School in 1952. He began taking over the family farm responsibilities while he was still in high school because his father was very ill for some time. He was drafted into the U.S. Army in 1957 and served for 6 months while he spent the rest of his obligation in the Army Reserves. In 1965, Myron was named the Young Brown County Farmer of the Year by the Chamber of Commerce. He continued to operate the family farm and worked part time in the summer cutting peas for Larsen Canning Company and later was a part time bulk milk hauler. Myron married Lucille Guszak on April 12, 1969 at Our Lady Queen of Peace Church in Sugar Bush (now St. Thomas the Apostle.) Myron and Lucille continued to run the family farm allowing his parents and sister to move to Green Bay. His faith, family and home farm were very important to him. Myron was a life-time member of St. Thomas the Apostle Church and served as a Eucharistic Minister for many years. Being a very dedicated farmer, it was not always easy to get away from the farm. However, he enjoyed spending time with family at the beaches, parks, fishing up in Townsend, visiting the Milwaukee Zoo or taking a trip to Wisconsin Dells. Myron also enjoyed spending time with family for birthdays and holidays. After spending all his life on the farm, Myron and Lucille retired from farming and moved to Green Bay where they were able to do more traveling. He particularly enjoyed the trips to visit the Amish to watch them work in the fields with their horses or going to horse pull competitions and events. Myron was an avid Packer and Brewer fan. He and his dad went to Packer games as far back as the time when the team played at The City Stadium. Myron was also able to attend the Ice Bowl game. He could also be found playing cards with family and friends. There was always a big smile on his face when his three grandsons visited and he always wanted to hear about and attend their sporting events. Myron is survived by his wife of 51 years, Lucille; his four children, Sandi (Rodney) Zellner; Joseph Radart and son, Isaiah; Victor Radart (fiancée, Brenda Malcore); James (Lisa) Radart and sons, Caleb and Brayden; also brothers-in-law, cousins and friends. He was preceded in death by his parents and his sister, JoAnn Radart. Visitation at St. Thomas the Apostle Church, 5930 Humboldt Road, Luxemburg, Wednesday, August 5, 2020, from 9am until the time of the funeral. Funeral Mass, 11am Wednesday at the church with Rev. Carlo Villaluz officiating with full military honors to follow. Entombment in Allouez Chapel Mausoleum. Malcore (East) Funeral Home is serving the family. The family wishes to thank all Myron’s caretakers at Autumn Fields, Southern Care Hospice and Dr. James Williams for their wonderful care and concern for him. Thanks also to all those who visited Myron, sent cards or prayed for him.

Myron Charles Radart, 85, passed away August 1, 2020. Born November 25, 1934 in Sugar Bush, Town of Humboldt, he is the son of the late Joseph and Anna (Arvey) Radart. Myron graduated from Luxemburg High School in 1952. He began taking over... View Obituary & Service Information

The family of Myron Charles Radart created this Life Tributes page to make it easy to share your memories.

Send flowers to the Radart family.