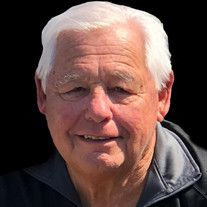 Michael J. Steeno, 72, Green Bay, passed away unexpectedly, March 24, 2020. Born Sept. 20, 1947, in Green Bay, he is the son of the late William “Si” and Arletta (Bourguignon) Steeno. After graduating high school, Michael faithfully served in the US Army. He continued to display his pride as a veteran throughout his life. After returning from the service, he married Cindy Gerondale on Oct. 3, 1970 at St. Mary of the Angels Church. Michael was a long-time employee of the Wisconsin Department of Transportation (DOT) retiring in 2007. He always lived life to the fullest and enjoyed socializing. Michael was an active member of the Men’s Club at St. Mary of the Angel’s. He enjoyed working many church picnics making Booyah for 40 plus years. He also enjoyed his annual fishing trip to Canada. Michael was an avid cribbage player. Michael was also a huge sports fan, especially the Packers, Brewers, Badgers, and UWGB Women’s Basketball team. The sporting events he loved more than any other, was any sporting event in which one of his grandchildren was participating; whether it be at a softball diamond, football field, track, or gymnasium. He and Cindy enjoyed being “Snowbirds” in Arizona for the last five years. They expanded many of their personal interest while there, where Michael also cooked hamburgers for the local curling club and also learned to be a “Jeeper”. Michael and Cindy also loved spending their summers in Shawano. He was affectionately known as the “Mayor” of the Shawano County Park. Michael will be remembered for his daily making and sharing of popcorn by EVERYONE. Michael is survived by his wife of nearly 50 years, Cindy; three children, Sarah (Mark) Kugel, Emily (Jamie) Stock and Mark (Chantelle) Steeno; grandchildren, Katie, Rachel, William, Madison, Brynleigh, and Jax; brothers and sisters, Jerry (Jackie) Steeno, Tom (Mary) Steeno, Robert Steeno, Mary Nys; brothers-in-law and sisters-in-law; many nieces and nephews. He was preceded in death by his parents; brothers, Dick and David Steeno; and his mother and father-in-law, Armella Gerondale and Fred (Carol) Gerondale. Memorial Gathering for Michael will be held on Saturday, April 24, 2021, at St. Mary of the Angels Church, 650 S. Irwin Street, from 9:30am until the time of the funeral. Memorial Mass, 11:00am, Saturday, April 24, 2021, at the church. Inurnment of cremated remains in the Wall of Honor of Allouez Catholic Cemetery will immediately follow the mass with full military honors . Michael’s family extends a very special thank you to their friends Russ and Linda Christiansen.

The family of Michael J. Steeno created this Life Tributes page to make it easy to share your memories.

Send flowers to the Steeno family.