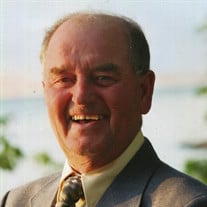 Melvin “Mel” A. Vandevelde Jr., 81, Green Bay, died peacefully at a local hospital on August 14, 2017, with family by his side. Born on August 5, 1936, in Tonet, Wis., he is the son of the late Melvin Sr. and Viola (Lardinois) Vandevelde. Mel was a 1954 graduate of Luxemburg High School, where he participated in wrestling. On September 20, 1955, he married the former Janice Schaut at St. Francis Xavier Cathedral. Mel retired after 45 years as a mason, then became employed with the Bellin valet team, where he remained for 15 years. Mel cherished spending time with his two precious kitties Sammy and Shiloh, and feeding the wildlife. Mel loved to go out to eat with family and friends. He was also a fan of the Packers and Brewers, and enjoyed playing cards with friends. He enjoyed poking around in his woods, which included clearing and chopping wood. He was known to say, “I can get up and go to work, play cards, come home and putz in the woods or around the house, and spend time with my kitties.” His famous phrase was, “Life doesn’t get any better than that.” Mel is survived by his loving wife of 61 years, Janice; three children, Cheryl (William) Vanden Heuvel, De Pere, Steven (Kassy) Vandevelde, Green Bay, and Sheila Vandevelde, Abrams; five grandchildren; seven great grandchildren; one sister and brother-in-law, Janice (Edwin) Delcore, New Franken; one brother and sister-in-law, Sylvester “Jim” (Diane) Vandevelde, Amberg; one sister-in-law, Maryann Vandevelde; and many nieces and nephews. He was preceded in death by three brothers and one sister-in-law, Myron Vandevelde, Everett (Ollie) Vandevelde, and Kenny Vandevelde; two sisters and one brother-in-law, Betty (Orville) Delvaux, and Muriel (Herman) Bader; parents; and his in-laws, Arthur and Marie Schaut. Visitation Wednesday at St. Willebrord Church, 209 S. Adams St., in the Fr. Ken Hall from 9:00 a.m. until the time of the funeral. Mass of Christian Burial 10:30 a.m. Wednesday in the church with the Rev. Andy Cribben, O. Praem officiating. Malcore (East) Funeral Home is assisting the family with services, 432-5579. Entombment at Shrine of the Good Shepherd Mausoleum.

The family of Melvin A. Vandevelde Jr. created this Life Tributes page to make it easy to share your memories.

Send flowers to the Vandevelde family.