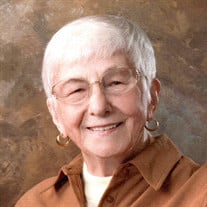 On March 28, 2019, Mary Louise Ziga passed on to her next adventure in life at the age of 99 years and 7 months. Mary Lou was born on August 13, 1919, in Pittsburgh, PA to Austro-Hungarian immigrants Edith Heindl Ziga and Joseph Ziga. She was joined over a 14 year span by younger siblings Ernest (living in Pittsburgh), Margaret Maclean (deceased, Delray Beach, FL), Charles (deceased, Pittsburgh) and Elizabeth Ann Russolillo (living in Delray Beach, FL). Mary Lou’s upbringing in an extended family with siblings, aunts, an uncle and grandparents instilled her love of conversation, celebrations, and Old World culture. After her post-high school education, Mary Lou worked at the premier department store in Pittsburgh, Kaufmann’s, then as a secretary to the chief engineer at the Pittsburgh Coal Company. Her independence and restless spirit led her temporarily to New York City where she was drawn to the Catholic Worker Movement. Although she returned to Pittsburgh, she longed for more freedom and independence than was traditionally granted to women at the time. Through connections made by a local priest, she traveled to The Grail in Ohio and became a resident and worker at this lay Catholic community that still educates and empowers women to be catalysts of change. At the Grail, Mary Lou discovered and nurtured her love and aptitude for art, literature, and community. In 1949 a contact at Grailville asked Mary Lou to teach a weaving class at St. Catherine Bookshop, formerly on Jefferson Street in Green Bay. While there, Mary Lou accepted a temporary position at the bookshop, and she subsequently became the buyer and operator until her retirement in 2003 at the age of 84. Managing St. Catherine’s became Mary Lou’s lifetime passion for more than 50 years. The work allowed her to combine her interests in art, reading, and religion with service as a leader in the Catholic community of Green Bay. She traveled to Central and South America, Asia, Europe and other countries to search for unique items to sell in the Bookshop. At the Bookshop, afternoon tea from 3-5 PM became an occasion for gatherings of community residents, friendly debates, and discussions about church and world events. Helping people to connect was one of Mary Lou’s extraordinary talents. The atmosphere that she created via St. Catherine Bookshop was recognized, and in December 2006, the Green Bay Press-Gazette named Mary Lou the year’s Everyday Hero in the business category because she made Northeastern Wisconsin a better place to live. In her years after retirement, Mary Lou’s zest for life was undiminished. She fulfilled her desire to paint and her residence continued to be a destination for friends and family. Mary Lou believed that we should take chances and accept what God wants. She would want her many friends and family members to celebrate her life and their memories of her with spirited conversation. Mary Lou’s treasured friends who provided so much support, especially in her later years, include Pat Rupp and her family, Donna and Mike Shanley, Judy Schumacher, James and Kathlin Sickel and their family, Missy Creevy from Milwaukee, and caregivers Dr. James Williams and the staff at Moraine Ridge Assisted Living Facility. Mary Lou’s remaining family of two siblings, a sister-in-law, and eight nieces and nephews with their families are left with fond memories of her joyful spirit. Visitation will be held at St. John the Evangelist Catholic Church, 413 Saint John Street on Friday, April 5 from 2-4 PM, followed by the Mass of Christian Burial with Fr. Paul Demuth officiating and a memorial gathering to follow. Contributions can be made to the Grailville, 931 O’Bannonville Road, Loveland, Ohio 45140-9705, Ph. 513-683-2340, or to any preferred organization.

On March 28, 2019, Mary Louise Ziga passed on to her next adventure in life at the age of 99 years and 7 months. Mary Lou was born on August 13, 1919, in Pittsburgh, PA to Austro-Hungarian immigrants Edith Heindl Ziga and Joseph Ziga. She... View Obituary & Service Information

The family of Mary Louise Ziga created this Life Tributes page to make it easy to share your memories.

Send flowers to the Ziga family.