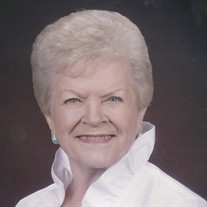 Mary G. (Hess) Gauthier, 94, Green Bay, passed away Sunday, March 17, 2019, at a local assisted living facility after a year long battle with colon cancer. Mary was born January 25, 1925, in Fond du Lac, WI, and moved as a child to Milwaukee. She enjoyed growing up with with her siblings and many friends. Mary met her husband Ervan at a wedding in 1941, and they were married two years later at Saint Joseph's Catholic Church in Milwaukee. Mary and Ervan moved to Green Bay in 1943, to begin their life together where they raised four children. They were charter members of St. Bernard Catholic Church and were active in the community. She enjoyed golfing with her lady friends at Mystery Hills and Woodside. She enjoyed traveling around the world with Ervan at her side. Mary spent the summers at Point Sable with her family and friends. She especially enjoyed these summers with her grandchildren, and great grandchildren that she loved dearly. She is survived by her three sons, Ronald (Mary) Gauthier, James Gauthier, and Thomas (Ann) Gauthier; six grandchildren, Tim (Sue) White, Todd (Raquel) White, Luke Gauthier, Mitchell (Kristi) Gauthier, Max Gauthier and special friend, Laurie, Faith Gauthier and special friend Brett, and special friend Michelle Gauthier. She is also survived by many great grandchildren, nieces and nephews. Mary was preceded in death by her husband, Ervan, and daughter Cheryl; parents, Mathias and Mary (Rozek) Hess; brothers, Elmer, Syl (Doris) and John Hess; sisters, Alice (Frank) Schaefer and Delores (Jim) Fitzgerald. Friends and family may gather at Malcore Funeral Home, 701 N. Baird St., Thursday March 21, from 4 PM until 8 PM. Parish wake service at 7 PM at the funeral home. Visitation will continue at St. Bernard Catholic Church, 2040 Hillside Ln., on Friday, March 22, from 9 AM until the time of the Mass of Christian Burial at 10:30 AM with Rev. Mark Vander Steeg officiating. Entombment at Nicolet Memorial Gardens. Mary's family wishes to thank Aurora Oncology Department, Dr. Brooke Estevez and her staff for their exceptional care. Mary was able to enjoy the final weeks of her life at Woodside Manor because of the kind and compassionate care she received from the nursing staff. A special thank you to Bobbie Anne and Michelle at Salon Cocepts for making her feel her best for many years.

The family of Mary Gauthier created this Life Tributes page to make it easy to share your memories.

Send flowers to the Gauthier family.