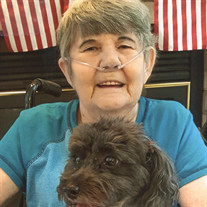 It is with mixed emotions that we share the passing of our mother/grandmother/sister/friend Mary Lou (Lambert) Couillard, only 77 years young. She was called home by God on September 7, 2017, after suffering from COPD for over a decade. Although it has been a long and agonizing battle, it was also a journey that allowed family the time to spend special moments with her and to say goodbye. Born on October 22, 1939, in Green Bay, Mary Lou is the daughter of the late Bernard and Myrul Lambert. She attended St. Joseph’s Elementary School and St. Joseph’s Academy before marrying Jack Couillard in October of 1963, at St. Francis Xavier Church. Mary was an early pioneer of a working mother in a male-dominated environment at Drop Forge in the early 70’s. She also worked at Kohls, Krolls, and KI, and was the sole provider for her children Wendy, David and Carla. Her children were the joys of her life, and she emphasized to each of them the importance of staying in school and developing good work ethics. Mary Lou loved her dog Mitzi, from the first moment that she held her in her arms. They filled each other’s day with incredible joy and companionship. The most difficult decision for Mary Lou was the realization that she could not protect her precious jewel any longer, and Mitzi was given to family to care for. Mary Lou will wait in anticipation of when they can snuggle their warm bodies together again in Heaven. Mary Lou, with her Irish heritage, loved to spend time with family—sometimes the day passing into night. She adored Elvis Presley and country music– cranking up the juke box on Saturdays for the weekend cleaning ritual. Her life passions included Packer games, fishing, painting, and reading. In 1979, she wrote a poem for her daughter’s wedding entitled “Hand in Hand”. In the years that followed, Mary’s poem was published in a book called Whimsical Recollections, and eventually put to music. Survivors include: Wendy (Mark) Roffers of Abrams, David (Cindy) Couillard of Green Bay, and Carla Couillard of Green Bay; two grandchildren, Jason and Jeremy Roffers; sisters, Carol (Terry) Young, Lois Woodford, and Sharon (Harvey) Losinski; brothers, Joe (Marie) Lambert, and Toby (Sue) Lambert; and sister-in-law Florence Lambert. Mary was preceded in death by her parents Bernard and Myrul Lambert , husband Jack Couillard, two brothers Dick Lambert and Jim (Jennifer) Lambert, and brother-in-law Bob Woodford. Visitation at Allouez Chapel Mausoleum, 2121 Riverside Dr, from 11 AM to 2 PM on Wednesday, September 13. Service at 2 PM Wednesday in the Mausoleum with Deacon Jerry Coenen officiating. Burial in Allouez Cemetery. The family would like to extend a sincere appreciation and thank you to Heidi and the caregivers at Cardinal Ridge. They made her feel at home immediately, especially enjoying the comfort of her room and home-cooked meals. They would also like to say thank you to Tara at Unity Hospice in helping both Mary Lou and family members through the health digression of her COPD illness. Both Heidi and Tara extended their love and devotion to Mary Lou in very special ways. In lieu of flowers a memorial fund has been established at the funeral home.

It is with mixed emotions that we share the passing of our mother/grandmother/sister/friend Mary Lou (Lambert) Couillard, only 77 years young. She was called home by God on September 7, 2017, after suffering from COPD for over a decade. Although... View Obituary & Service Information

The family of Mary Lou Couillard created this Life Tributes page to make it easy to share your memories.

It is with mixed emotions that we share the passing of our mother/grandmother/sister/friend...

Send flowers to the Couillard family.