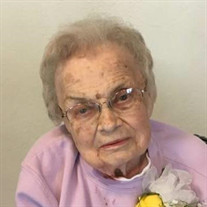 Marion Coppens, 95, Green Bay, passed away Monday evening, June 19, 2017, at a local care facility. Born June 2, 1922, the youngest child of John and Mary (Stepeck) Hooper in Klondike, WI. She was a graduate of Coleman High School in 1940 and graduated from vocational school in Green Bay studying bookkeeping. She was always thankful to her brother, Ed, who provided for her so she was able to obtain a professional degree. Following school, she was employed in Oconto Falls where she met and married Phillip Coppens on August 26, 1944, and he preceded her in death on April 22, 2001. The couple made their home in Oconto Falls where they raised their two daughters and also owned Coppens Implement Sales. The family eventually moved to Green Bay. Marion continued to work as a bookkeeper and secretary until her retirement. She will be remembered for her enjoyment of knitting, crossword puzzles and playing cards with her friends. Marion is survived by twin daughters and their spouses, Jean and Norb Wendricks, Green Bay and Judy Hill, Oconto and her friend, Don Romenesko, Kimberly; granddaughters and spouses, Jennifer (Geof) Patefield, Green Bay, Teresa (Kurt) Gott, Coral Springs, FL, Marcy (Jose) Fanello-Diaz, East Hartford, CT; great-grandchildren, Devon Gott, Zella Patefield; sister-in-law, Lucille Coppens, Oconto Falls; and many nieces and nephews. She was preceded in death by her parents; husband of 57 years, Phillip; a son-in-law, John Hill; sisters, Blanche (Joe) Kershek and Hannah (George) Jorgensen; brother, Edward Hooper; two infant brothers, Robert and William. Celebration of Marion’s Life will be held at S & S Hometown 211 S. Maple Ave. in Oconto Falls, on Sunday, July 9, 2017, from 4-7pm. Marion will be laid to rest in a private service at Fort Howard Memorial Park, Green Bay. Malcore (West) Funeral Home is assisting the family. In lieu of other expressions of sympathy, memorials may be made in Marion’s name to a charity of your choice. Marion’s family extends a special thank you to Dr. Fred Walbrun; Alpha Senior Concepts, in Suamico, especially, Ashley, Kelsey, and Corinne; and Sheri Brandenburg of Heartland Hospice.

Marion Coppens, 95, Green Bay, passed away Monday evening, June 19, 2017, at a local care facility. Born June 2, 1922, the youngest child of John and Mary (Stepeck) Hooper in Klondike, WI. She was a graduate of Coleman High School in 1940 and... View Obituary & Service Information

The family of Marion H. Coppens created this Life Tributes page to make it easy to share your memories.

Send flowers to the Coppens family.