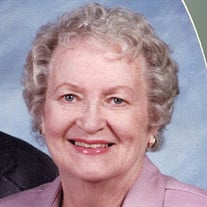 Marian Inez Kaesbauer, 92, peacefully passed away on June 22, 2017. Born January 14, 1925, in Dubuque, Iowa, she is the daughter of the late Clarence and Clara Pregler. Marian married Michael Kaesbauer, Sr, who preceded her journey to heaven, on May 23, 2003. Marian was a longtime resident of Green Bay, prior to moving to Fond du Lac. Before residing in Green Bay, she spent many enjoyable years in Rothschild, WI. Marian was a special person to family and friends. She was family focused. In Green Bay she shared her caring for others as the Volunteer Coordinator at Parkview Manor. Marian was also a successful sales consultant at Rummele’s Jewelers, Zales, and Diamonds and Gold, all in Green Bay. These were just not jobs to Marian, as she found such pleasure and satisfaction in these roles. She was knowledgeable in jewelry and simply said she enjoyed helping and being with people. Marian was adventurous and was always up to try something new and fun. She always said she would rather fish than eat! For many years she could be found spending Mother’s Day weekend on the Prairie River in Gleason, WI with her waders on and fly rod in hand. She was also a gourmet cook. Her pies and other specialty dishes were enjoyed by family and friends regularly. If you were fortunate enough to eat at her house you never left hungry and always commented that “this was best food you ever had”. Marian was most happy when she was with family and her dog Daisey, who was the center of her life. Daisey and Marian were an inseparable pair. Marian had an incredibly strong relationship with her 2 grandchildren, Amanda and Adam. They talked with their grandma regularly. She would often comment on how fortunate she was to have such a relationship. Marian was not only their grandma, but also their confidant and best friend. Marian was a devote Catholic. She was a long-time member of St. Peter and Paul and Holy Cross Parishes. Her faith in God was strong as she attended mass regularly and lived a Christian life. Marian is survived by her son, Michael (Marie) Kaesbauer, Jr., Green Bay; her daughter, Clare (Steven) Courtemanche, Fond du Lac; grandchildren, Adam, Amanda and Ben, along with a great grandchild, Carter; and the joy of her life, her dog, Daisey. She was preceded in death by her parents; her sisters, Jane, Lila, and Kay; and her beloved husband, Michael, Sr. Visitation at Holy Cross Church, 3009 Bay Settlement Rd., Monday from 10am until the time of the mass at 11am with Rev. Michael Weber, O. Praem. officiating. Burial in Holy Cross Cemetery. Malcore Funeral Home is serving the family. Visit www.malcorefuneralhome.com to share a condolence with the family.

Marian Inez Kaesbauer, 92, peacefully passed away on June 22, 2017. Born January 14, 1925, in Dubuque, Iowa, she is the daughter of the late Clarence and Clara Pregler. Marian married Michael Kaesbauer, Sr, who preceded her journey to heaven,... View Obituary & Service Information

The family of Marian Inez Kaesbauer created this Life Tributes page to make it easy to share your memories.

Send flowers to the Kaesbauer family.